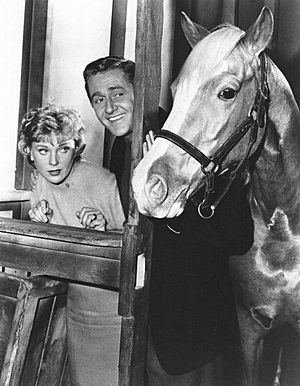 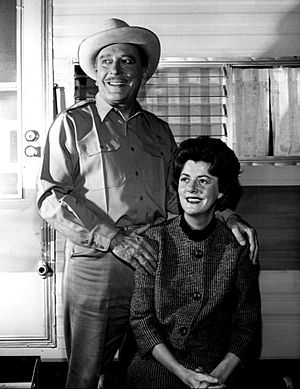 Mister Ed is an American television sitcom produced by Filmways that aired in syndication from January 5 to July 2, 1961, and then on CBS from October 1, 1961 to February 6, 1966. The show's title character is a talking horse which originally appeared in short stories by Walter R. Brooks.

Mister Ed is one of the few series to debut in syndication and be picked up by a major network for prime time. All 143 episodes were filmed in black and white.

The Mister Ed show concept was derived from a series of short stories by children's author Walter R. Brooks which began with The Talking Horse in the September 18, 1937, issue of Liberty magazine. Brooks is best known for the Freddy the Pig series of children's novels which feature talking animals that interact with humans. Arthur Lubin's secretary Sonia Chernus introduced him to the Brooks stories and is credited with developing the concept for television.

The show's concept resembles that of the Francis the Talking Mule movies in which an equine character talks to only one person, thus causing a variety of opportunities and frustrations. The first six Francis films (1950–55) were also directed by Lubin. He wanted to make a Francis television series but had been unable to secure the rights, so he optioned the Brooks' stories for television. Comedian George Burns financed the pilot for Mister Ed, which was shot at his McCadden Studio in Hollywood at a cost of $70,000. Scott McKay played Wilbur. Jack Benny was also involved behind the scenes.

Lubin was unable to sell the show to a network, so he decided to sell it into syndication first. He managed to get single-sponsor identification for the program on over 100 stations. The show was recast with Alan Young in the lead. Production began in November 1960, although Lubin did not direct early episodes because he was working in Europe on a film. The first 26 episodes were received well enough for the show to be picked up by CBS.

The show in effect had two leads operating as a comedy team. The title role of Mister Ed, a talking palomino, was played by gelding Bamboo Harvester and voiced by former Western film actor Allan Lane. The role of Ed's owner, a genial but somewhat klutzy architect named Wilbur Post, was played by Alan Young. The Posts resided at 17230 Valley Spring Road in the San Fernando Valley of Los Angeles. Many of the program's gags follow from Mister Ed's tendency to talk only to Wilbur, his skills as an obnoxious and inconsiderate troublemaker, and his precociously human-like behavior that far exceeds anything those around Wilbur expect of a horse. A running gag is other characters hearing Wilbur talking to Ed and asking to whom he is talking. Another running gag centers on Wilbur being accident-prone and inadvertently causing harm to himself and others. According to Lubin, Young was chosen for the lead role because he "just seemed like the sort of guy a horse would talk to".

The other main character throughout the series is Wilbur's generally tolerant young wife, Carol (Connie Hines). The Posts also have two sets of neighbors, to whom Ed delights in making Wilbur appear as eccentric as possible. They included the Addisons, Roger (Larry Keating) and his wife Kay (Edna Skinner), who both appeared from the pilot episode until Keating's death in 1963; thereafter, Skinner continued appearing as Kay, without mention of Roger's absence, until the neighbors were recast. During this period, Kay's brother Paul Fenton (Jack Albertson), who had made occasional appearances before, appears. Following the Addisons, the Posts' new neighbors were Col. Gordon Kirkwood, USAF (Ret.), Wilbur's former commanding officer (Leon Ames), and his wife Winnie (Florence MacMichael). They appeared on the series from 1963 to 1965. In the final season, the Kirkwoods were phased out, while Carol's grumpy and uptight father, Mr. Higgins (Barry Kelley), who appeared occasionally throughout the entire series, apparently moved in with Wilbur and Carol during the final episodes. Wilbur and his father-in-law did not get along at all because Mr. Higgins loathed Wilbur, whose quirky eccentricity and klutzy, half-hearted attempts to be friendly always clashed with Mr. Higgins's emotionless and uptight personality. Carol's father never stopped trying to persuade her to divorce Wilbur, whom he often and openly referred to as a "kook" because of Wilbur's clumsiness. Alan Young performed double duty during the final season of the series, also directing nearly all episodes.

Mister Ed's ability to talk was never explained and rarely contemplated on the show. In the first episode, when Wilbur expresses an inability to understand the situation, Mister Ed offers the show's only remark on the subject: "Don't try. It's bigger than both of us!"

Several celebrity guest stars appeared as themselves during the course of the series:

Shout! Factory announced in June 2009 that they had acquired the rights to release Mister Ed on DVD, and subsequently released the six seasons on DVD in Region 1 in the U.S. Notably, Seasons 4 and 5 are not available outside of the continental U.S. The sixth and final season was released on May 12, 2015.

Syndicated versions of eight episodes were utilized for the Season One DVD release. All other DVD releases contain unedited, full-length versions.

One episode (the second-season episode "Ed the Beneficiary") has lapsed into the public domain. Also in the public domain is a 19-minute production of the United States Department of the Treasury, done in the style of a Mister Ed episode with the show's full cast (but without a laugh track), promoting Savings Bonds, and the original unaired pilot, which was published without a copyright notice.

On December 9, 2014, Shout! Factory released Mister Ed- Complete Series on DVD in Region 1. The 22-disc set contains all 143 episodes (including the eight episodes of season one uncut) of the series as well as bonus features.

In 2004, a remake was planned for the Fox network as a reboot, directed by Michael Spiller and written by Drake Sather. The remake starred Sherman Hemsley as the voice of Mister Ed, David Alan Basche as Wilbur, and Sherilyn Fenn as Carol.

In 2012, Waterman Entertainment announced they were developing a new feature film based on Mister Ed.

A race horse named after the character in the television show took part in the 1994 Grand National steeplechase at Aintree, England, but did not complete the course.

In 2007, it was reported that a housing developer intended to create a community near Tahlequah, Oklahoma, built around the supposed final resting place of Mister Ed (who died in 1970). It was intended to be themed to the style of the show and its period.

All content from Kiddle encyclopedia articles (including the article images and facts) can be freely used under Attribution-ShareAlike license, unless stated otherwise. Cite this article:
Mister Ed Facts for Kids. Kiddle Encyclopedia.