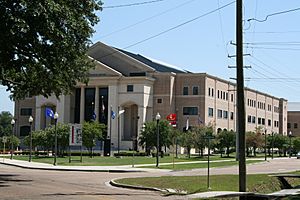 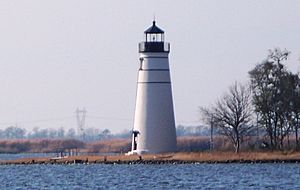 Madisonville's Tchefuncte River Lighthouse stands on the Saint Tammany northshore of Lake Pontchartrain. This lighthouse was built in 1837.

St. Tammany Parish (French: Paroisse de Saint-Tammany) is a parish located in the U.S. state of Louisiana named after Tamanend, the Legendary Principle Lenape Chief & the "Patron Saint of America." At the 2010 census, the population was 233,740, making it the fifth-most populous parish in Louisiana. In 2020, its population was 264,570. The parish seat is Covington. The parish was founded in 1810.

St. Tammany Parish is included in the New Orleans–Metairie metropolitan statistical area. St. Tammany Parish is one of the fastest-growing parishes in the state, along with Livingston and Ascension. The population has quadrupled since 1970, and is expected to double again by 2030, expecting to diversify the population of the parish. Though it was not heavily directly damaged by Hurricane Katrina, the community is growing in large part due to subsequent displacement of populations because of the shifting landscape in the larger Metropolitan area due to the recovery and subsequent climate change effects.

Saint Tammany Hall (background) is the first building students pass on going through the main entrance to Southeastern Louisiana University in Hammond, Louisiana.

St. Tammany Parish Public Schools operates the public schools in the parish. They are consistently rated as among the highest-performing in the state.

The parish is the eponym of Saint Tammany Hall on the campus of Southeastern Louisiana University, in neighboring Tangipahoa Parish.

All content from Kiddle encyclopedia articles (including the article images and facts) can be freely used under Attribution-ShareAlike license, unless stated otherwise. Cite this article:
St. Tammany Parish, Louisiana Facts for Kids. Kiddle Encyclopedia.