Covington is a city in and the parish seat of St. Tammany Parish, Louisiana, United States. The population was 8,765 at the 2010 census. It is located at a fork of the Bogue Falaya and the Tchefuncte River.

Covington is part of the New Orleans–Metairie–Kenner Metropolitan Statistical Area. 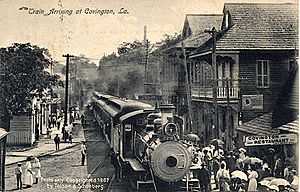 The earliest known settlement by Europeans in the area was in 1800 by Jacques Drieux. In 1813, John Wharton Collins established a town there with the name of Wharton. He is buried on the corner of the city cemetery directly across from the Covington Police Department. There are conflicting stories about how the city came to be named Covington. Many historians believe the city was renamed after General Leonard Covington, a hero of the War of 1812. However, local historian Judge Steve Ellis floats another theory centered on the suggestion by Jesse Jones, a local attorney, that the city be named in honor of the Blue Grass whiskey---made in Covington, Kentucky---enjoyed by town officials.

In any case, Leonard Covington is the namesake of both towns. Initially, commerce was brought to Covington via boat up the Bogue Falaya River, which used the Tchefuncte River as a means of passage to and from Lake Pontchartrain. Then in 1888, the railroad came to town. Much of those rails are now occupied by the Tammany Trace, a thirty-one mile bike trail running through multiple cities north of Lake Pontchartrain.

In the late 20th century, with the expansion of Louisiana's road system, many people who worked in New Orleans started living in Covington, commuting to work via the Lake Pontchartrain Causeway. This is considered to be associated with white flight out of New Orleans, though the Jefferson Parish area saw the most expansion during that period.

Hurricane Katrina made landfall near Slidell, but Covington was sufficiently elevated to escape the massive storm surge; however, the city suffered devastating wind damage. Following the storm, Covington, along with the rest of the North Shore of Lake Pontchartrain, experienced a population boom as a result of many former inhabitants of the New Orleans area being forced to move out of their storm-ravaged homes. The town's population continues to grow.

There were 3,258 households out of which 33.8% had children under the age of 18 living with them, 46.8% were married couples living together, 17.2% had a female householder with no husband present, and 32.1% were non-families. 27.5% of all households were made up of individuals and 9.9% had someone living alone who was 65 years of age or older. The average household size was 2.52 and the average family size was 3.10. 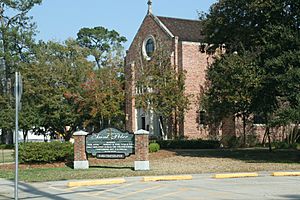 The Covington Trailhead is the start of Tammany Trace, a 31-mile paved trail for hikers and bicyclists, which connects Covington with Mandeville, Abita Springs, and Lacombe.

All content from Kiddle encyclopedia articles (including the article images and facts) can be freely used under Attribution-ShareAlike license, unless stated otherwise. Cite this article:
Covington, Louisiana Facts for Kids. Kiddle Encyclopedia.