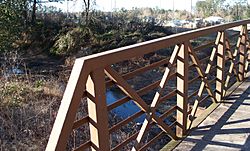 Footbridge across a tributary of Ponchatoula Creek leading to North Oak Street Park on the campus of Southeastern Louisiana University in Hammond, Tangipahoa Parish

Tangipahoa Parish ( French: Paroisse de Tangipahoa) is a parish located in the southeast corner of the U.S. state of Louisiana. As of the 2010 census, the population was 121,097. The parish seat is Amite City, while the largest city is Hammond. Southeastern Louisiana University is located in Hammond. Lake Pontchartrain borders the southeast side of the parish.

The name Tangipahoa comes from an Acolapissa word meaning "ear of corn" or "those who gather corn." The parish was organized in 1869 during Reconstruction.

Tangipahoa Parish comprises the Hammond, LA Metropolitan Statistical Area, which is also included in the New Orleans-Metairie-Hammond, LA-MS Combined Statistical Area. It is one of what are called the Florida Parishes, at one time part of West Florida.

Tangipahoa Parish began in 1869, when it was carved from Livingston Parish, St. Helena Parish, St. Tammany Parish, and Washington Parish. It was flooded in 1932.

The name comes from the Tangipahoa River and the historic Tangipahoa Native American people.

Most of the parish south of Ponchatoula consists of Holocene coastal swamp and marsh—gray-to-black clays of high organic content and thick peat beds underlying freshwater marsh and swamp.

Amtrak's daily City of New Orleans long-distance train stops in Hammond, both northbound (to Chicago) and southbound. It serves about 15,000 riders a year, and Hammond-Chicago is the ninth-busiest city pair on the route.

The historic main line of the Illinois Central that carries freight through the parish is now part of CN. It continues to be busy.

The parish is served by the Tangipahoa Parish School System. Southeastern Louisiana University is located in Hammond.

On seven occasions, the American Civil Liberties Union has sued the Tangipahoa Parish School Board, along with other defendants, for having allegedly sponsored and promoted religion in teacher-led school activities.

The elected school board governs and oversees the Tangipahoa Parish School System (TPSS). The board appoints the superintendent of schools, who leads the school system and oversees is functioning. The current superintendent is Melissa M. Stilley. The president of the board is Sandra Bailey-Simmons, and the vice president is Tom Tolar.

The Board has a long history of racial discrimination in the hiring of teachers. In 1975, it was ordered to ensure one-third of the teaching staff were Black. Both the Board and the Court ignored the mandate for more than thirty years. During the period from 1998 to 2008, the Board hired fewer Black teachers than any other school system in the state. In 2010, a second ruling strengthened the first.

All content from Kiddle encyclopedia articles (including the article images and facts) can be freely used under Attribution-ShareAlike license, unless stated otherwise. Cite this article:
Tangipahoa Parish, Louisiana Facts for Kids. Kiddle Encyclopedia.