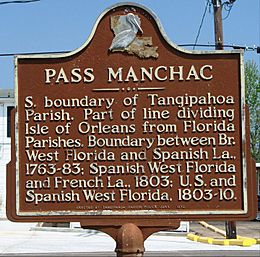 Middendorf Restaurant is, as of 2012, actually a sequence of three restaurants along old United States Highway 51. The view is toward the south.

Fort Bute or Manchac Post, named after the then British Prime Minister John Stuart, 3rd Earl of Bute, was established in 1763 at the junction of Iberville River (Bayou Manchac) with the Mississippi River, and remained an important military and trading post in British West Florida until captured by Spanish forces under Bernardo Galvez of Louisiana (New Spain) on September 7, 1779, during what became known as Battle of Fort Bute of the American Revolutionary War. Manchac was raided in February 1778 by American forces under the command of James Willing—see related articles, Continental Marines and USS Morris. Fort Bute/Manchac Post/Mississippi River at Bayou Manchac is 45 miles from Manchac, La.

Manchac was one of the originally-planned stations along the railroad, which were generally at ten-mile intervals. Akers' father, William Akers, was the founder and first mayor of the town of Ponchatoula, the next station to the north. Manchac straddles the railway, which, at the start of the 21st century, is part of the Canadian National Railway system.

Manchac is part of the Hammond Micropolitan Statistical Area. The name "Manchac" derives from a Choctaw expression for "rear entrance" (i.e., to Lake Pontchartrain).

"Akers" is for Willie Akers, a telegraph operator on the New Orleans, Jackson and Great Northern Railroad, who in 1857 began operating Manchac's first post office.

Manchac is located on Lake Maurepas on the Pass Manchac waterway, which connects to Lake Pontchartrain. It is home to the ruins of one of the five lighthouses set up for Lake Pontchartrain, the Pass Manchac Light. The last lighthouse to be built on the north side of the entrance to Pass Manchac (the fourth one on that site) was completed in 1857. It was automated in 1941, and the dwelling was razed in 1952; the U.S. Coast Guard decommissioned the light and abandoned the property in 1987.

Manchac is known for fishing, duck hunting, seafood restaurants like Middendorf's, and swamp tours. It is also home to the Port Manchac Distribution Center, with storage facilities and rail, truck, and water links to the east, west, and north. Interstate 55 has exit and entrance ramps for Manchac.

All content from Kiddle encyclopedia articles (including the article images and facts) can be freely used under Attribution-ShareAlike license, unless stated otherwise. Cite this article:
Manchac, Louisiana Facts for Kids. Kiddle Encyclopedia.