Kentwood is a rural town in Tangipahoa Parish, Louisiana near the Mississippi border. The population was 2,205 at the 2000 census. It is part of the Hammond Micropolitan Statistical Area.

Water from Kentwood is bottled and popularly marketed in New Orleans under the Kentwood Springs label. Kentwood is also known as "The Dairy Capital of the South." Kentwood formerly held a dairy parade each November where people sold crafts and miscellaneous items. The festival has not been held for several years due to the shutdown of the dairy plant in the 1970s and the subsequent decline of the town and its economy. Later, the parade and festival were moved to the summer months. Kentwood is best known as the hometown of singer Britney Spears.

This rural town was founded by Amos Kent in 1893.

On August 30, 2012, pressure on a dam on the Tangipahoa River to the north of the town as a result of Hurricane Isaac led to Louisiana Governor Bobby Jindal calling for a mandatory evacuation of the town due to fears of large-scale flooding from Lake Tangipahoa. The evacuation order was later rescinded and the dam held.

There were 850 households out of which 30.7% had children under the age of 18 living with them, 32.6% were married couples living together, 28.2% had a female householder with no husband present, and 34.2% were non-families. 29.9% of all households were made up of individuals and 15.8% had someone living alone who was 65 years of age or older. The average household size was 2.59 and the average family size was 3.28. 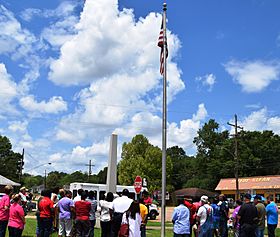 Kentwood residents observe a noontide Day of Prayer in front of the Town Hall during 2015.

All content from Kiddle encyclopedia articles (including the article images and facts) can be freely used under Attribution-ShareAlike license, unless stated otherwise. Cite this article:
Kentwood, Louisiana Facts for Kids. Kiddle Encyclopedia.