Hammond is the largest city in Tangipahoa Parish, Louisiana, United States. It is 45 miles east of Baton Rouge. Its population was 20,019 in the 2010 census; Hammond is home to Southeastern Louisiana University. It is the principal city of the Hammond Metropolitan Statistical Area, which includes all of Tangipahoa Parish.

The city is named for Peter Hammond (1798–1870) — the surname anglicized from Peter av Hammerdal (Peter of Hammerdal) — a Swedish immigrant who first settled the area around 1818. Peter, a sailor, had been briefly imprisoned by the British at Dartmoor Prison during the Napoleonic Wars. He escaped during a prison riot, made his way back to sea, and later on arrived in New Orleans. Hammond used his savings to buy then-inexpensive land northwest of Lake Pontchartrain. There, he started a plantation to cultivate trees, which he made into masts, charcoal, and other products for the maritime industry in New Orleans. He transported the goods by oxcart to the head of navigation on the Natalbany River at Springfield. He owned at least 30 slaves before the Civil War. Peter Hammond lost his wealth during the war, as Union soldiers raided his property.

In 1854, the New Orleans, Jackson and Great Northern Railroad (later the Illinois Central Railroad, now Canadian National Railway) came through the area, launching the town's emergence as a commercial and transport center. The point where the railroad met the trail to Springfield was at first known as Hammond's Crossing. Peter Hammond's grave is near the center of town under the Hammond Oak, along with the graves of his wife Caroline Hammond (née Tucker), three of their eight children, and a favorite slave boy. The Hammond Oak is a member tree of the Live Oak Society.

During the Civil War, the city was a shoe-making center for the Confederate States Army. The shoe-making industry was the work of Charles Emery Cate, who bought land in the city in 1860 for a home, a shoe factory, a tannery, and a sawmill. Toward the end of the war, Cate laid out the town's grid, using the rail line as a guide and naming several of the streets after his sons. Also, Cate Street is named for him.

After the Civil War, light industry and commercial activities were attracted to the town. By the end of the 19th century, Hammond had become a stopping point for northern rail passengers traveling south and for New Orleanians heading north to escape summer yellow fever outbreaks. The city later became a shipping point for strawberries, so a plaque downtown gave it the title of "Strawberry Capital of America".

In the 1920s, David William Thomas edited a weekly newspaper in Hammond prior to moving to Minden, the seat of Webster Parish. There, he was elected mayor in 1936. In 1932, Hodding Carter founded the now-defunct Hammond Daily Courier, which he left in 1939 to move to Greenville, Mississippi, later receiving a Pulitzer Prize for his reporting on the Civil Rights Movement. Since 1959, The Daily Star has been Hammond's locally published daily newspaper.

During World War II, the Hammond Airport (now Hammond Northshore Regional Airport) served as a detention camp for prisoners of war from Nazi Germany. Additionally, the U.S. Army established and used the 15,216-acre (61.58 km2) Hammond Bombing and Gunnery Range east of the city.

Today, Hammond is intersected by Interstates 12 and 55. Its airport has a long runway which serves as a backup landing site for Louis Armstrong New Orleans International Airport and serves as a major training site for the Louisiana Army National Guard, as well as the home base for the Louisiana Air National Guard's 236th Combat Communications Squadron. About 15 mi (24 km) south of the city, on both the railroad and I–55, lies Port Manchac, which provides egress via Lake Ponchartrain with the Gulf of Mexico. The combination of highway-rail-air-sea transportation has transformed modern Hammond from a strawberry capital to a transportation capital. The city hosts numerous warehouses and is a distribution point for Walmart and other businesses, and Southeastern Louisiana University in Hammond offers the state's only academic degree in supply chain management.

In 1953, John Desmond opened the first architectural firm in Hammond. He was chief architect of the Tangipahoa Parish School Board for some two ecades before he relocated to Baton Rouge. New Orleans attorney, political activist, and state government watchdog C.B. Forgotston relocated to Hammond in 2006. Lawson Swearingen, a former Democratic member of the Louisiana State Senate and a former president of the University of Louisiana at Monroe, resides in Hammond, where he is a professor of management at Southeastern Louisiana University.

The city was the home base for production of the first season of the NBC television series In the Heat of the Night, starring Carroll O'Connor.

There were 6,251 households out of which 29.4% had children under the age of 18 living with them, 34.9% were married couples living together, 20.2% had a female householder with no husband present, and 40.7% were non-families. 28.7% of all households were made up of individuals and 8.6% had someone living alone who was 65 years of age or older. The average household size was 2.51 and the average family size was 3.19. 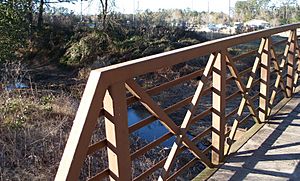 Ponchatoula Creek, the stream along which Peter Hammond settled, has figured prominently in development of Hammond, Louisiana. Here this footbridge crosses a tributary between Southeastern's University Center and spacious North Oak Park.

Hammond has railways, highways (including the intersection of two interstates), and air travel/transport.

Both the southbound and northbound daily City of New Orleans schedules have afternoon stops in Hammond, so Amtrak Superliner trains are a common sight. About 15,000 passengers use the station every year. Many are coming from or going to Baton Rouge, some 40 miles west.

The Queen Anne-style station (1912), situated at the center of town, was renovated in 2008, with an ADA-compliant platform added soon after that. Amtrak staff provide on-site ticketing and baggage services.

Part of Hammond's success is due to its location at the junction of two heavily traveled interstate highways:

State highways serving the area include:

The Hammond Northshore Regional Airport has a runway long enough to land the Concorde (1976–2003) and to serve as back-up for Louis Armstrong New Orleans International Airport. The largest unit of the Louisiana Army National Guard is stationed at Hammond, adjacent to the site. The airport is also the home base for the 236th Combat Communications Squadron of the Louisiana Air National Guard.

The airport has no regularly scheduled passenger service but is convenient for charter flights and corporate aviation purposes.

The climate in this area is characterized by hot, humid summers and generally mild to cool winters. According to the Köppen climate classification system, Hammond has a humid subtropical climate, Cfa on climate maps.

All content from Kiddle encyclopedia articles (including the article images and facts) can be freely used under Attribution-ShareAlike license, unless stated otherwise. Cite this article:
Hammond, Louisiana Facts for Kids. Kiddle Encyclopedia.