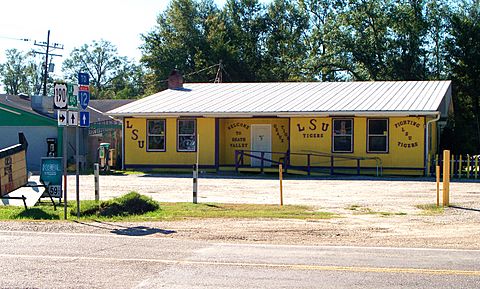 Minnie's Roadhouse in central Robert manifested a pronounced preference in intercollegiate sports until the restaurant closed in 2011.

Robert is an unincorporated community in Tangipahoa Parish, Louisiana, United States. It lies east of Hammond, at the intersection of US 190 and LA 445, from which it has a signed exit on Interstate 12. Robert is the largest settlement in Tangipahoa Parish's rural 8th ward.

During World War II a 15,216-acre (61.58 km2) tract northeast of Robert served as the Hammond Bombing and Gunnery Range. As late as 2009 the 300 property owners in the tract were still under legal obligation to disclose the potential for unexploded ordnance. "[R]esidents cannot do as they wish with their properties . . . [but] have a moral obligation to reveal that it was a bombing range during a sale" according to Bruce Harrell CPA.

All content from Kiddle encyclopedia articles (including the article images and facts) can be freely used under Attribution-ShareAlike license, unless stated otherwise. Cite this article:
Robert, Louisiana Facts for Kids. Kiddle Encyclopedia.