Independence, originally known as Uncle Sam, is a town in Tangipahoa Parish, Louisiana, United States. The population was 1,665 at the 2010 census. It is part of the Hammond Micropolitan Statistical Area.

The move to establish Independence as a town was led in the early 20th century by State Representative Harry D. Wilson, who subsequently served from 1916 until his death early in 1948 as the Louisiana Commissioner of Agriculture and Forestry. Wilson was a son of Dr. and Mrs. William D. Wilson. In 1856, Dr. Wilson had built a store in Independence, which remained for years the oldest building in the community. Harry Wilson worked in the parish seat of Amite in the general store of the merchant Jacob Stern at a time when Tangipahoa Parish did not yet depend on the strawberry crop. During the 1890s, Wilson was an express messenger for the Illinois Central Railroad. He left that position to pursue a political career.

Affectionately known by voters as "Uncle Harry" or "Mister Harry", Wilson served two nonconsecutive terms in the state House from 1900 to 1904 and again from 1908 to 1912. A strong promoter of his hometown of Independence, located five miles to the south of Amite, Wilson in 1902 and 1903 corresponded with Governor William Wright Heard regarding incorporation of the community, which at the time had a population of 308. Governor Heard informed Wilson that he considered the three square miles proposed for the new town as too much land for a small village and suggested that the tract be reduced in size. Originally named "Uncle Sam", Independence had begun in 1852 when the New Orleans, Jackson and Great Northern Railroad began operating through the area. Independence was finally proclaimed a town on August 22, 1912.

There were 663 households, out of which 31.2% had children under the age of 18 living with them, 42.1% were married couples living together, 21.9% had a female householder with no husband present, and 32.7% were non-families. 28.1% of all households were made up of individuals, and 15.2% had someone living alone who was 65 years of age or older. The average household size was 2.60 and the average family size was 3.21.

Many attributes of the Italian culture, including food, in Independence are described in Italian Culture in Independence. Other useful resources are Southeastern Louisiana University's Center for Regional Studies and the Tangipahoa Parish tourist information center. 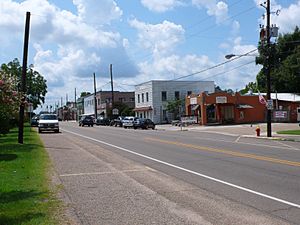 All content from Kiddle encyclopedia articles (including the article images and facts) can be freely used under Attribution-ShareAlike license, unless stated otherwise. Cite this article:
Independence, Louisiana Facts for Kids. Kiddle Encyclopedia.