Bogalusa is a small city in Washington Parish, Louisiana. The population was 12,232 at the 2010 census. It is the principal city of the Bogalusa Micropolitan Statistical Area, which includes all of Washington Parish and is also part of the larger New Orleans–Metairie–Bogalusa Combined Statistical Area. The name of the city derives from the Choctaw words bogue lusa, which translates to "dark water" in English. 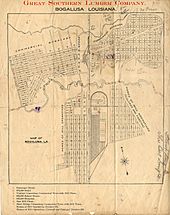 In 1908, the Great Southern Lumber Company (1908–38) sawmill began operation, and the Goodyear (Frank Henry Goodyear and Charles W. Goodyear) interests of New York built the city of Bogalusa to house workers for the sawmill. William H. Sullivan, the sawmill manager for the Goodyears, was town boss when the city was built (1906–1907) and then mayor until he died on June 26, 1929. The city, designed by New Orleans architect Rathbone DeBuys and built from nothing in less than a year, with several hotels, a YMCA and YWCA, churches of all faiths, and houses for the workers and supervisors, was called the Magic City due to its rapid construction. Bogalusa was incorporated as a city on July 4, 1914. At its peak in 1960, the city had over 21,000 residents.

The Great Southern Lumber Company's sprawling sawmill produced up to 1,000,000 board feet (2400 m3) of lumber a day. The sawmill closed in 1938, and was replaced as the city's main industry by a paper mill and a chemical plant run by Gaylord Container Corporation. The Crown Zellerbach Corporation acquired Gaylord's operations in 1955. An attempt to keep the sawmill open with California redwood proved too costly, and the mill was closed. Crown Zellerbach was the target of a hostile takeover in 1985, and the succeeding company for its container division was a new Gaylord Container Corporation, which operated for 16 years until acquired by Temple-Inland in 2002.

In the mid-1960s, Bogalusa was a center of activity for the Deacons for Defense and Justice.

In 1995 a railroad tank car imploded at Gaylord Chemical Corporation, releasing nitrogen tetroxide and forcing the evacuation of about 3,000 people within a one-mile (1.6 km) radius. Residents say "the sky turned orange" as a result. Emergency rooms filled with about 4,000 people who complained of burning eyes, skin, and lungs. Dozens of lawsuits were filed against Gaylord Chemical and were finally settled in May 2005, with compensation checks issued to around 20,000 people involved in the accident.

On August 29, 2005, Hurricane Katrina hit the city with winds of about 110 mph (175 km/h), downing numerous trees and power lines. Many buildings in Bogalusa received damage from falling trees, and several were destroyed. Most of the houses, businesses, and other buildings suffered roof damage from the storm's ferocious winds. Some outlying areas of the city were without power for over a month.

There were 5,431 households out of which 29.3% had children under the age of 18 living with them, 36.1% were married couples living together, 23.8% had a female householder with no husband present, and 35.6% were non-families. 32.7% of all households were made up of individuals and 16.5% had someone living alone who was 65 years of age or older. The average household size was 2.41 and the average family size was 3.05.

All content from Kiddle encyclopedia articles (including the article images and facts) can be freely used under Attribution-ShareAlike license, unless stated otherwise. Cite this article:
Bogalusa, Louisiana Facts for Kids. Kiddle Encyclopedia.