Scott is the fourth largest municipality in Lafayette Parish, Louisiana, United States. The population 8,614 as of the 2010 U.S. census, and 8,119 at the 2020 census, up from 7,870 at the 2000 census. Scott is a suburban community of Lafayette and is part of the Lafayette metropolitan statistical area in Acadiana.

In 1902, Gabby Anderson built a western style saloon to serve as "an exclusive, all- men's bar and a meeting place for old folks." His reason for the saloon is because he believed "this is where the west begins". However, it is believed that the slogan started because Scott was where eastern train fare rates ended and western train, referred to as the "West Line," fare rates began. 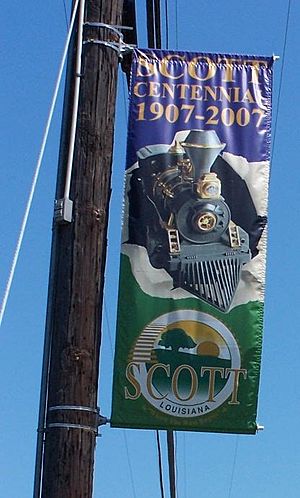 The rail line of the Union Pacific Railroad cuts the town in two. The main line used to be that of Southern Pacific Railway. The first settler of Scott was Alexander Delhomme, who took land in the northern part of the town. Delhomme owned the first hay-mowing machine, grit mill and cotton gin. By 1880, the train depot was completed and the town became a village. In 1907, the town was incorporated and named after J. B. Scott, who was Division Superintendent of Southern Pacific Railroad. The village became a town in 1960 and the town became a city in 1990.

According to the United States Census Bureau, the city has a total area of 8.9 square miles (23 km2), all of it land.

All content from Kiddle encyclopedia articles (including the article images and facts) can be freely used under Attribution-ShareAlike license, unless stated otherwise. Cite this article:
Scott, Louisiana Facts for Kids. Kiddle Encyclopedia.