Duson is a town in Acadia and Lafayette parishes in the U.S. state of Louisiana. The population was 1,716 at the 2010 census. The town was named after Curley Duson, a legendary sheriff of St. Landry Parish

Originally known as "Duson Station", the town was laid out by J.G. Parkerson, general manager of the Louisiana Western Railroad. By August 30, 1880, the railroad line from New Orleans to Houston was completed, and passenger and freight service began. It merged with the Southern Pacific Railroad in 1900. The village of Duson was incorporated on December 16, 1909, named after the land developer Curley Duson, and installed Adolph De Jean as the first mayor. 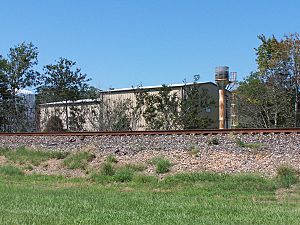 A typical cotton mill along the railroad in Duson

In 1927, St. Theresa Catholic Church was completed. Cotton farming was the main agriculture for the area. Three cotton gins were in Duson until the mid-1960s. Fires destroyed two and the third was torn down. After World War II, small lots east of Duson were developed, with small houses using brick siding paper on the exterior. Because of that, the area became known as "Paper Town."

There were 644 households out of which 38.2% had children under the age of 18 living with them, 41.6% were married couples living together, 20.5% had a female householder with no husband present, and 29.7% were non-families. 25.3% of all households were made up of individuals and 8.9% had someone living alone who was 65 years of age or older. The average household size was 2.59 and the average family size was 3.07.

Like many other towns and cities in the Acadiana region, Duson has a local Mardi Gras celebration that includes a parade through the town. Many residents of nearby Lafayette, Scott and Rayne will converge on the town, as most parades in the region are scheduled as to not occur simultaneously.

All content from Kiddle encyclopedia articles (including the article images and facts) can be freely used under Attribution-ShareAlike license, unless stated otherwise. Cite this article:
Duson, Louisiana Facts for Kids. Kiddle Encyclopedia.