Iota is a town in Acadia Parish, Louisiana, United States. The population was 1,500 at the 2010 census. Its previous names were "Pointe Aux Loups" (French for "Wolves' Point") "Cartville" and "Hodge town"

Iota is part of the Crowley Micropolitan Statistical Area.

According to the United States Census Bureau, the town has a total area of 1.3 square miles (3.3 km2), all land.

There were 524 households out of which 38.0% had children under the age of 18 living with them, 54.0% were married couples living together, 12.0% had a female householder with no husband present, and 28.6% were non-families. 27.1% of all households were made up of individuals and 13.5% had someone living alone who was 65 years of age or older. The average household size was 2.62 and the average family size was 3.20.

Iota was represented in the novel No Place Louisiana by Martin Pousson, published in 2002. 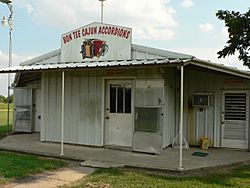 Iota is home to the annual "Tee Mamou/Iota Mardi Gras Folklife Festival" during Mardi Gras Day, attracting thousands of tourists and visitors. The festival offers authentic Cajun food, crafts, and music. In contrast to the elaborate costumes and regal "krewes," for example, in the New Orleans Mardi Gras festivities, in Iota and surrounding areas, Cajuns celebrate the more traditional ritual of the Courir de Mardi Gras riders. Disguised in home-made costumes which often feature faux tatters and tall conical caps known as capuchons, the townspeople maraude through the surrounding countryside incognito, speaking only Cajun French, begging for ingredients for a chicken and sausage gumbo. The gumbo is the centerpiece of the community supper the same night, where the Mardi Gras riders sing the Chanson de Mardi Gras, an old song in Cajun French sung for generations, then take off their masks and reveal, ostensibly for the first time that day, the identity of each rider.

All content from Kiddle encyclopedia articles (including the article images and facts) can be freely used under Attribution-ShareAlike license, unless stated otherwise. Cite this article:
Iota, Louisiana Facts for Kids. Kiddle Encyclopedia.