Bastrop is the largest city in and the parish seat of Morehouse Parish, Louisiana. The population was 11,365 at the 2010 census, a decrease of 1,623 from the 12,988 tabulation of 2000. The population of Bastrop is 73 percent African American. It is the principal city of and is included in the Bastrop, Louisiana Micropolitan Statistical Area, which is included in the Monroe-Bastrop, Louisiana Combined Statistical Area.

Bastrop was founded by the Baron de Bastrop (born Felipe Enrique Neri), a Dutch businessman accused as an embezzler. He had fled to the then Spanish colony of Louisiana to escape prosecution, and became involved in various land deals. In New Spain, he falsely claimed to be a nobleman. He received a large grant of land, provided that he could settle 450 families on it over the next several years. However, he was unable to do this, and so lost the grant. Afterwards, he moved to Texas, where he claimed to oppose the sale of Louisiana to the United States, and became a minor government official. He proved instrumental in Moses Austin's plan (and later, that of his son, Stephen F. Austin) to bring American colonists to what was then northern Mexico.

Bastrop formally incorporated in 1857, and is the commercial and industrial center of Morehouse Parish. In the 19th century, it was notable as the western edge of the great north Louisiana swamp, but more favorable terrain resulted in the antebellum rail line connecting to Monroe, Louisiana, further to the south.

Bastrop was a Confederate stronghold during the American Civil War until January 1865, when 3,000 cavalrymen led by Colonel E.D. Osband of the Third U.S. Colored Cavalry, embarked from Memphis, Tennessee, for northeastern Louisiana. Landing first in southeastern Arkansas, Osband and his men began foraging for supplies into Louisiana and established headquarters at Bastrop. They brought in a large number of horses, mules, and Negroes, according to the historian John D. Winters in The Civil War in Louisiana. When Osband learned that Confederate Colonel A.J. McNeill was camped near Oak Ridge in Morehouse Parish with 800 men, he sent a brigade into the area. The Union troops found fewer than 60 Confederates, most of whom fled into the swamps, leaving behind horses and mules.During the Great Mississippi Flood of 1927, Bastrop was the site of a relief camp for refugees. During World War II, it was the site of German prisoner-of-war camp. 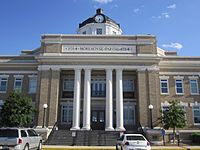 Bastrop is also the parish seat of Morehouse Parish and is within an area marketed to tourists as the Sportsman's Paradise Region of Louisiana. It is a Main Street Community and has received Transportation Enhancement funding for improvements in its historic district.

Celebrations and concerts are held in the historic downtown at the restored 1914 Morehouse Parish Courthouse and Rose Theater. Bastrop is home to the Snyder Museum and Creative Arts Center, housed in the circa 1929 home of a local family. Volunteers lead heritage appreciation tours for children and interpret the history of the parish using local artifacts.

According to the United States Census Bureau, the city has a total area of 8.9 square miles (23 km2), all of it land.

There were 4,723 households out of which 33.1% had children under the age of 18 living with them, 37.0% were married couples living together, 28.6% had a female householder with no husband present, and 30.1% were non-families. 27.2% of all households were made up of individuals and 12.5% had someone living alone who was 65 years of age or older. The average household size was 2.66 and the average family size was 3.25.

1023rd Engineer Company (Vertical) of the 528th Engineer Battalion of the 225th Engineer Brigade is located in Bastrop.

All content from Kiddle encyclopedia articles (including the article images and facts) can be freely used under Attribution-ShareAlike license, unless stated otherwise. Cite this article:
Bastrop, Louisiana Facts for Kids. Kiddle Encyclopedia.