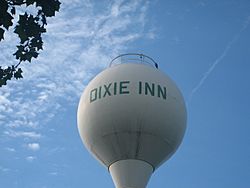 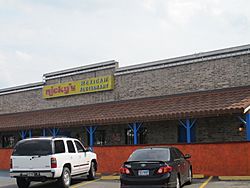 Nicky's Mexican Restaurant is located at the intersection of Highways 80 and 371 in Dixie Inn.

Historic Antioch Baptist Church on U.S. Highway 80 in Dixie Inn dates to 1872. It has been twice ravaged by fire, most recently on October 20, 1957, when the sanctuary and the educational building were destroyed. The current church complex opened in October 1959. There is a small cemetery to the right of the church.

Dixie Inn is a village in Webster Parish, Louisiana, United States. The population was 352 at the 2000 census. It is located off Interstate 20 at the old Shreveport Road, some twenty-six miles east of Shreveport. Minden, the seat of Webster Parish, is located some three miles to the east. Dixie Inn is part of the Minden Micropolitan Statistical Area.

Most of the original houses in Dixie Inn were built during World War II to serve munitions workers at the former Louisiana Army Ammunition Plant located off U.S. Highway 80 to the east.

In January 2016, the Dixie Inn Village Council approved an ordinance, 109-A, which doubles speeding fines on residential streets. The move was initiated to stop motorists from using the back streets to avoid the traffic light at the intersection of Highways 80 and 371. Violations will henceforth cost $150, with a $2 increment for each mile over the limit.

As of January 1, 2017, Dixie Inn has an all-female village government consisting of Mayor Kay Hallmark-Stratton (No Party), elected by a one-vote margin over her female predecessor, and three Republican aldermen, Donna Suman Hoffoss, Nell Finley, and Judy McKenzie.

The Antioch Baptist Church in Dixie Inn was first established in September 1858 as the Gum Spring Church, named for a natural spring near the site of what became in the next century the Louisiana Army Ammunition Plant. The church moved eastward to the existing site effective February 25, 1872, with the Reverend John Dupree as the first part-time pastor. Antioch observed a centennial ceremony on that same day in 1972. In 1882, fire destroyed the building and all church records. The structure was rebuilt and new rooms were added over the years. In 1943, the church called J. R. Hearron as its first full-time pastor.

In 1957, Antioch opened a new brick-veneer sanctuary, the planning of which had been undertaken during the tenure of pastor Millard Robert Perkins, Sr. (1918–1979), a native of Glenmora in Rapides Parish. However, the construction was not completed until the summer of 1957, by which time Thomas E. Windsor had become the pastor. On October 20, 1957, a few months after the construction of the new sanctuary, all of the church buildings except the pastor's residence were razed by fire. Reconstruction soon began and was completed in October 1959. Since Hearron, the full-time Antioch pastors have included Cecil Basham, J. Guy Allen, Millard Perkins, Thomas Windsor, Jack Edwin Byrd, Sr., Charles W. Wallace, and Malcolm Self (1937-2015). Wayne Reeves was called from Antioch as a pastor in Many, Louisiana.

Millard Perkins was a graduate of East Texas Baptist University in Marshall, Texas, and New Orleans Baptist Theological Seminary and had been the pastor of several congregations in Texas and Louisiana, including the Gilgal Baptist Church, originally established in 1842 and based in a 1947 sanctuary located on the Old Arcadia Road near Minden. Prior to his death of a heart attack, he operated Perkins Grill in downtown Minden. He was survived by his wife, the former Pearl Buxton, and five children. Perkins is interred at Memorial Park Cemetery in Monroe, Louisiana.

According to the United States Census Bureau, the village has a total area of 0.3 square miles (0.78 km2), all land.

There were 146 households out of which 32.9% had children under the age of 18 living with them, 32.2% were married couples living together, 19.2% had a female householder with no husband present, and 39.7% were non-families. 32.2% of all households were made up of individuals and 13.0% had someone living alone who was 65 years of age or older. The average household size was 2.41 and the average family size was 3.03.

All content from Kiddle encyclopedia articles (including the article images and facts) can be freely used under Attribution-ShareAlike license, unless stated otherwise. Cite this article:
Dixie Inn, Louisiana Facts for Kids. Kiddle Encyclopedia.