Springhill is a city in northern Webster Parish, Louisiana, United States. The population was 5,279 at the 2010 census, a decrease of 160 since 2000. Springhill is part of the Minden Micropolitan Statistical Area though it is thirty miles north of Minden, the seat of government of Webster Parish. The Springhill population is 34 percent African American, compared to 25 percent minority in 2000.

The 1979 film Five Days from Home, which was directed by and starred George Peppard, was filmed primarily in Springhill. Peppard's third wife, Sherry Boucher, is a Springhill native; her father, Jesse L. Boucher was a businessman and developer who served as mayor of Springhill.

Webster Parish was first permanently settled about 1818 near Overton south of the parish seat of Minden. According to genealogical findings, William Farmer, Samuel Monzingo, J. A. Byrnes, and Joseph Murrell were the first settlers in the area. These settlers formed an area that was initially referred to informally as "Piney Woods." In 1894, though still unincorporated, what would eventually become Springhill took the name "Barefoot, Louisiana" on the notions of a Mrs. Maxwell, who assigned the name based on her observations that many men in the community went to work without shoes. The town that is today Springhill was finally incorporated in 1902. The first mayor was N.B. Taylor, who followed a year thereafter by B.D. Wilson. Peter Modisette was the mayor from 1914–1925.

Springhill City Hall is located opposite the Springhill Civic Center, a meeting hall which cost $500,000 and was financed in the late 1960s under a voter-approved bond issue, with millage taxes levied against property owners.

On March 31, 2014, Governor Bobby Jindal announced that IntegriCo Composites, a company that manufactures railroad cross ties, will open a plant in Springhill that will employ three hundred persons. Jindal called the new plant part of a "manufacturing renaissance" in Louisiana. State Senator Robert Adley of Benton, said that Springhill "so desperately needs and deserves" these jobs. He added that the community has "taken some hard licks during the past years. This will create some economic momentum for the town and the region." 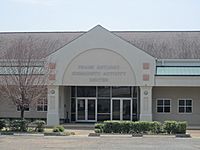 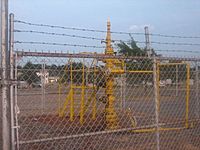 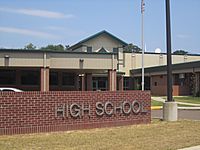 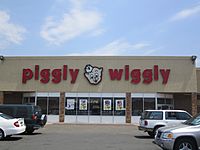 Springhill is one of the smaller cities with a Piggly Wiggly grocery store outlet.

After it purchased the plywood mill from International Paper, Georgia Pacific closed the plant. Another major employer, Trane, which manufactures air-conditioning components, relocated to Mexico.

There has been an expansion of the retail and service industries and improvement in the municipal infrastructure. Downtown Main Street has been revitalized with aesthetic improvements, new businesses, and renovation of the Springhill branch of the Webster Parish Library. The city still has a theater, The Spring.

A formerly abandoned grocery store was converted into the Frank Anthony Community Activity Center, which hosts community events and occasional concerts by such music icons as Willie Nelson and Springhill native Joe Stampley. 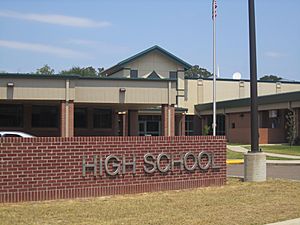 The former campus of the Georgia Howell Elementary School, built in 1956, has been closed because of unsafe building conditions. The pupils formerly assigned there now attend Browning or Brown Middle.

All content from Kiddle encyclopedia articles (including the article images and facts) can be freely used under Attribution-ShareAlike license, unless stated otherwise. Cite this article:
Springhill, Louisiana Facts for Kids. Kiddle Encyclopedia.