Kenner (historically French: Cannes-Brûlées) is the sixth-largest city in the U.S. State of Louisiana. It is the largest city in Jefferson Parish, United States, Louisiana's second-most populous parish, and a suburb of New Orleans. The population was 66,702 at the 2010 census.

Originally inhabited by the Tchoupitoulas Indians, the area along the Mississippi River was the first land in the New Orleans Metropolitan Area on which Europeans set foot. René-Robert Cavelier, Sieur de La Salle landed there in 1682. In 1855, Kenner was founded by Minor Kenner on land that consisted of three plantation properties that had been purchased by the Kenner family. At the time, all land north of what is now Airline Highway was swampland.

In Kenner on May 10, 1870, “Gypsy” Jem Mace defeated Tom Allen for the heavyweight championship of the bare-knuckle boxing era; a monument marks the spot near the river end of Williams Boulevard.

Kenner's growth began in the late 1950s when developers began subdividing, draining and filling the swampland in the northern half of the city. During the 1960s, the construction of Interstate 10 and improvements to Veterans Memorial Highway aided the rapid development of Kenner as a suburb of New Orleans.

In 1982, Pan Am Flight 759 crashed in a residential area of Kenner when a microburst forced it down. 8 people on the ground were killed, as were all 145 people on the aircraft. Six houses were completely destroyed and five more substantially damaged.

Kenner is located on the west side of the New Orleans Metropolitan Area, in Jefferson Parish. Its boundaries are Lake Pontchartrain to the north; the Mississippi River to the south; the unincorporated areas of Metairie and River Ridge to the east; and St. Charles Parish to the west.

There were 25,652 households out of which 36.3% had children under the age of 18 living with them, 50.9% were married couples living together, 16.3% had a female householder with no husband present, and 28.0% were non-families. 23.2% of all households were made up of individuals and 6.1% had someone living alone who was 65 years of age or older. The average household size was 2.72 and the average family size was 3.23. 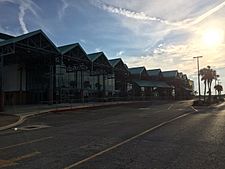 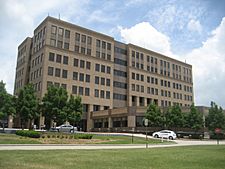 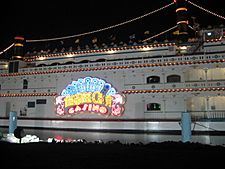 Kenner is home to the following: 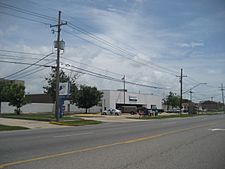 Kenner is served by Interstate 10 which travels east–west through the city. Traveling westbound from the city line there are exits at Power Blvd., LA 49 (Williams Blvd.)/32nd St. - New Orleans Int'l Airport, and Loyola Dr.

In addition the interstate, U.S. 61 (generally signed as Airline Dr.) travels east–west through the southern end of the city. LA 49 (signed as Williams Blvd.) is the city's primary north–south corridor.

Louis Armstrong New Orleans International Airport (IATA: MSY), the main commercial airport for the New Orleans metropolitan area, is located within the city limits, just south of Interstate 10. It serves as a major tax-revenue generator for the city.

All content from Kiddle encyclopedia articles (including the article images and facts) can be freely used under Attribution-ShareAlike license, unless stated otherwise. Cite this article:
Kenner, Louisiana Facts for Kids. Kiddle Encyclopedia.