Lecompte calls itself "The Pie Capital of Louisiana". 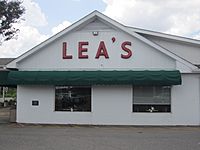 Lea's Lunchroom is a popular restaurant in Lecompte. 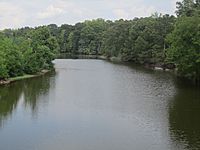 Lecompte is a town in Rapides Parish, Louisiana, United States. It is part of the Alexandria, Louisiana Metropolitan Statistical Area. The population was 1,227 at the 2010 census.

It is most famous for Lea's Lunchroom 1, a restaurant specializing in pie. Since 2002, the town has hosted an annual pie festival 2.

The town of Lecompte, Louisiana, was named after a famous race horse owned by the Wells family who lived on a plantation south of the town. The horse's name was LeComte. He won races at the Fair Grounds Race Course in New Orleans. During the days of the Lecompte High School, the yearbook was named The LeComte with a picture of the horse on the first page. When the railroad painted a sign on the side of the train depot years ago, a "p" was added to the name and it has been Lecompte ever since.

LeComte, the horse, was bought by an Englishman for an undisclosed large sum after winning a race, and died during the voyage back to England by catching cold and receiving poor care from the ship's crew.

Shreveport attorney Jackson B. Davis, who served in the Louisiana State Senate from 1956 to 1980, was born near Lecompte. One of Davis's state Senate colleagues, Cecil R. Blair of Rapides Parish, who served from 1960 to 1964 and 1966–1976, resided and operated a business in Lecompte.

Louisiana Public Service Commissioner Clyde C. Holloway, a resident of nearby Forest Hill, was born in Lecompte in 1943.

All content from Kiddle encyclopedia articles (including the article images and facts) can be freely used under Attribution-ShareAlike license, unless stated otherwise. Cite this article:
Lecompte, Louisiana Facts for Kids. Kiddle Encyclopedia.