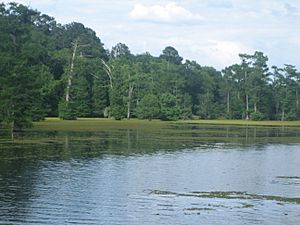 A mural of nearby Lake Bistineau State Park in Doyline

The First Baptist Church of Doyline

The United Methodist Church in Doyline

Doyline is a village in southwestern Webster Parish in northwestern Louisiana, United States. The population was 841 at the 2000 census. It is part of the Minden Micropolitan Statistical Area.

Under a cited cost-saving realignment plan, the Webster Parish School Board closed Union Elementary School in Doyline in 2011, as Doyline High School absorbed the elementary pupils. Vandals broke windows in the abandoned structure, which contained asbestos and black mold. The building was hence razed at a cost of $99,000.

The HBO television series True Blood about vampires is filmed in Doyline.

Doyline is an entry point to Lake Bistineau and the Lake Bistineau State Park. The lake itself, popular for fishing, is the reservoir of Dorcheat Bayou, a 122-mile stream that begins in Nevada County, Arkansas.

On August 24, 2006, an explosion of the Explo Systems, Inc., site at Camp Minden led to the evacuation of six hundred pupils nearby but caused no injuries or fatalities. The site is a former U.S. Army ammunition plant where military bombs were disassembled and recycled.

In December 2012, police began the removal of 2,700 tons of explosives from Camp Minden, located at the site of the former Louisiana Army Ammunition Plant, leading to evacuations from nearby Doyline.

According to the United States Census Bureau, the village has a total area of 3.3 square miles (8.5 km2), all land.

There were 325 households out of which 32.6% had children under the age of 18 living with them, 53.8% were married couples living together, 15.7% had a female householder with no husband present, and 27.4% were non-families. 25.5% of all households were made up of individuals and 12.0% had someone living alone who was 65 years of age or older. The average household size was 2.59 and the average family size was 3.08.

All content from Kiddle encyclopedia articles (including the article images and facts) can be freely used under Attribution-ShareAlike license, unless stated otherwise. Cite this article:
Doyline, Louisiana Facts for Kids. Kiddle Encyclopedia.