Haynesville is a town in northern Claiborne Parish, Louisiana, United States, located just south of the Arkansas border. The population was 2,327 at the 2010 census.

Haynesville is known as the "Gateway to North Louisiana" and the "Butterfly Capital of Louisiana". Loice Kendrick-Lacy of Haynesville published Gardening To Attract Butterflies: The Beauty And The Beast (2012). Kendrick-Lacy begins with memories of her childhood, when she was introduced to butterflies by her grandmother.

Haynesville was settled in 1818. The community took the name "Haynesville" in 1843 from farmer Samuel Haynes of Georgia, who established Old Haynesville some two miles south of the present site of the town. In 1898, the whole town moved north to meet the railroad, now the Louisiana and Northwest Railroad.

Modern Haynesville was built on a 1920s petroleum boom, one of the largest in Louisiana. For a time, the population reached twenty thousand. The "old boom town" was constructed in what is called Baucum Spur. It consisted of a hotel, restaurants, and saloons.

The Haynesville economy is supported still by oil as well as hunting, fishing, and timber, with considerable logging and pulpwood production in the area.

Haynesville has a variety of churches, including Baptist, United Methodist, Presbyterian, Missionary Baptist, Pentecostal, and Church of Christ.

Material on the history of Haynesville can be found at the Herbert S. Ford Memorial Museum located across from the Claiborne Parish Courthouse in Homer.

The most common soil is Eastwood series, which has 3 to 10 inches (76 to 254 mm) of brown very fine sandy loam over 20 inches (510 mm) of red clay. It supports a native forest vegetation of loblolly pine, shortleaf pine, southern red oak, American sweet gum and hickory.

The climate in this area is characterized by hot, humid summers and generally mild to cool winters. According to the Köppen Climate Classification system, Haynesville has a humid subtropical climate, abbreviated "Cfa" on climate maps. 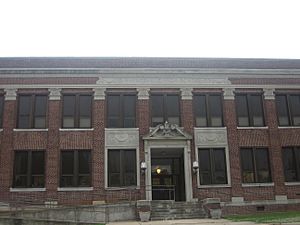 All content from Kiddle encyclopedia articles (including the article images and facts) can be freely used under Attribution-ShareAlike license, unless stated otherwise. Cite this article:
Haynesville, Louisiana Facts for Kids. Kiddle Encyclopedia.