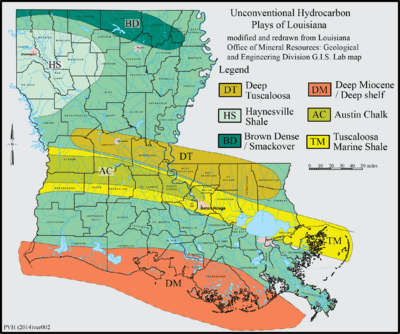 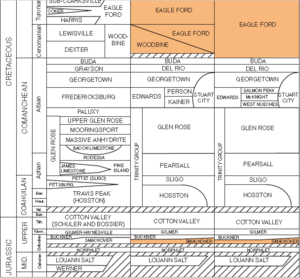 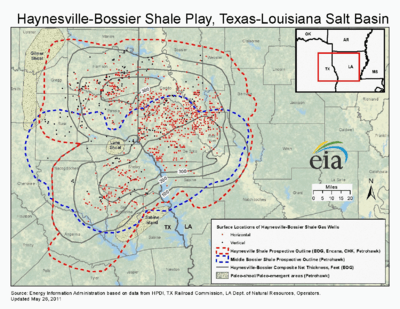 Very limited detailed descriptions of the Haynesville Shale indicated that it is fossiliferous. The reported fossils include unidentified coccoliths, bivalves, gastropods, and calcispheres. Both stratigraphic relationships and a nannofossil (coccolith) assemblage described from it indicates that it is Kimmeridgian, 151 to 157 million years old, in age.

The Haynesville Shale was deposited in a restricted basin that was located on a southward sloping continental shelf covered by relatively shallow water. The mudstone comprising it accumulated as a widespread and laterally continuous blanket across the limits of this restricted basin. The accumulation of pelleted, fossiliferous, organic-rich carbonate mud and even and wavy-lenticular laminated beds of very fine quartz silt and detrital clay reflects the mixed accumulation of carbonate sediments generated within this basin and clastic sediments that came from outside it. The northern edge of this basin consisted of shallow coastal waters floored by carbonate muds and oolite shoals lying just north of the modern Louisiana - Arkansas border. The shallow coastal waters were bordered further north by an arid coastal plain characterized by extensive sabkhas. The western edge of the basin in which the Haynesville Shale accumulated consisted of a broad north-south carbonate platform with prominent oolite shoals. The southern rim of this ancient basin and extent of the Haynesville Shale was an ancient Jurassic island, called "Sabine Island. This ancient island now lies deeply buried beneath the surface of Sabine County, Texas.

The carbonate platforms, their oolite shoals, the Sabine Island, and prehistoric Gulf of Mexico coastline created a restricted basin that marine currents could only readily access from the east. As a result of these restrictive conditions, anoxic conditions frequently occurred during the deposition of the sediments that form the Haynesville Shale. Anoxic bottom water conditions allowed organic matter falling to the floor of this basin to be preserved and incorporated into sediments that became the Haynesville Shale. The mechanisms by which organic matter accumulated within these sediments consisted of a complex interplay of local carbonate generation, clastic input from outside sources, variable burial rates, and variable bottom water anoxia and euxinia. 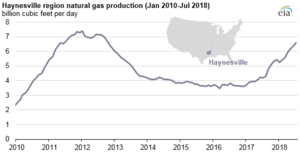 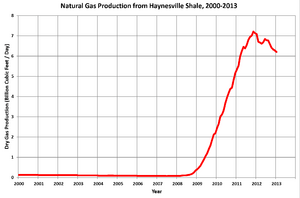 The Haynesville Shale came into prominence in 2008 as a major producer of shale gas in East Texas and Louisiana. Producing natural gas from the Haynesville Shale involves drilling wells from 10,000 feet (3,000 m) and to 13,000 feet (4,000 m) deep; the formation becomes deeper to the south.

The other members of the Haynesville Formation are also the source of oil and gas production. Oil and gas is currently produced from shelf-edge carbonate reservoirs which consist of oolite shoals within the Gilmer Limestone and Buckner Anhydrite members. The submarine fan sandstones of the Gray sand in north Louisiana are also significant producers.

A documentary film entitled "Haynesville: A Nation's Hunt for an Energy Future" has been made on the subject of the mineral rights leasing "gold rush" and the potential impact of the Haynesville Shale gas play on national and global energy picture.

Not long after the land-leasing boom began in 2008, new mineral owners across northwest Louisiana and East Texas joined online forums and began sharing information with each other about the process of oil and gas leasing, leasing bonus payments and well production results. GoHaynesvilleShale.com was the first and largest of its kind with over 20,000 members.

All content from Kiddle encyclopedia articles (including the article images and facts) can be freely used under Attribution-ShareAlike license, unless stated otherwise. Cite this article:
Haynesville Shale Facts for Kids. Kiddle Encyclopedia.