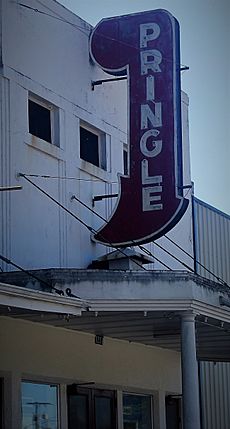 Glenmora is a town in Rapides Parish, Louisiana, United States. It is part of the Alexandria, Louisiana Metropolitan Statistical Area. The population was 1,342 at the 2010 census.

Claude Kirkpatrick, a member of the Louisiana House of Representatives from Jefferson Davis Parish from 1952–1960, a candidate for governor in 1963, and the instigator of Toledo Bend Reservoir was born in Glenmora but moved to Lake Charles when he was six years of age.

Virgil Orr, a former member of the Louisiana House from Ruston, the seat of Lincoln Parish, graduated from Glenmora High School in 1940. Lloyd George Teekell, a state representative from 1953 to 1960 and a 9th Judicial District Court judge from 1979 to 1990, was reared in Glenmora.

According to the United States Census Bureau, the town has a total area of 1.7 square miles (4.4 km2), all land.

Though a quaint, small town, nearly every major store is within walking or biking distance. There are no fast food places or big shopping centers. Fuzzie's is a Glenmora restaurant with old-fashion hamburgers and chicken strip baskets, Anne's Flea Market is an antiques store. Jack's Videos rents films on DVDs.

There are two gasoline stations, a Dollar General store, an elementary and high school, a small apartment area, and numerous empty buildings. It is home of Thunder Valley Speedway, a dirt track that hosts weekly events.

All content from Kiddle encyclopedia articles (including the article images and facts) can be freely used under Attribution-ShareAlike license, unless stated otherwise. Cite this article:
Glenmora, Louisiana Facts for Kids. Kiddle Encyclopedia.