Goldonna is a village in Natchitoches Parish, Louisiana, United States. The population was 457 at the 2000 census and 430 in 2010. All but sixteen of the residents are whites. It is part of the Natchitoches Micropolitan Statistical Area. South of Goldonna along Louisiana Highway 156, one may access Saline Bayou, popular for blackwater canoeing.

The village is the birthplace of the American romance author Patricia Maxwell, also known as Jennifer Blake, who resides in Quitman in Jackson Parish. Riley J. Wilson, a former U.S. representative from Louisiana's 5th congressional district who opposed Huey Pierce Long, Jr., was born in Goldonna.

The Goldonna Elementary School serves pre-kindergarten through grade 8. Pupils come from as far away as the village of Ashland to the west, where the defunct Ashland High School, closed in 1981.

According to the United States Census Bureau, the village has a total area of 11.0 square miles (28 km2), all land.

There were 163 households out of which 39.3% had children under the age of 18 living with them, 63.8% were married couples living together, 10.4% had a female householder with no husband present, and 19.6% were non-families. 17.2% of all households were made up of individuals and 11.7% had someone living alone who was 65 years of age or older. The average household size was 2.80 and the average family size was 3.15. 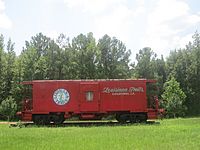 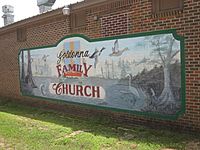 Mural of Goldonna Family Church, located across from the United States Post Office 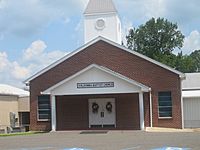 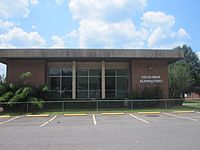 All content from Kiddle encyclopedia articles (including the article images and facts) can be freely used under Attribution-ShareAlike license, unless stated otherwise. Cite this article:
Goldonna, Louisiana Facts for Kids. Kiddle Encyclopedia.