Terrebonne Parish ( TAIR-ə-BONE; French: Paroisse Terrebonne) is a parish located in the southern part of the U.S. state of Louisiana. As of the 2010 census, the population was 111,860. The parish seat is Houma. The parish was founded in 1822.

It is the second-largest parish in the state in terms of land area, and it has been a center of Cajun culture since the 18th century. More than 10% of its residents speak French at home.

Terrebonne is represented in the Louisiana House of Representatives by the Republican businessman Gordon Dove of Houma. Dove's seat was previously held by Hunt Downer, a former Speaker of the Louisiana House of Representatives. Dove vacates the House seat in January 2016 to become Terrebonne Parish president. He was succeeded in the legislature by another Republican, Jerome Zeringue of Houma.

Ray Authement, the fifth president of the University of Louisiana at Lafayette, from 1974 to 2008 and the longest-serving president of a public university in the United States, was born in rural Terrebonne Parish, near Chauvin, in 1928.

Houma was named after the Houma people. The native word houma means red, and the tribe's war emblem was the crawfish. Historians say the Houma were related to the Muskogean-speaking Choctaw, and migrated into the area from present-day Mississippi and Alabama. They first settled near what is now Baton Rouge. After many conflicts with other Indian tribes, and losing a war to the Tunica in 1706, to escape the encroachment of Europeans, the Houma Indians continued moving south to more remote areas in the bayous. They settled in present-day Terrebonne Parish in the mid- to late 18th century. They established a camp known as Ouiski Bayou on the high ground northwest of what later developed as downtown Houma. They were subsequently pushed from the highlands of the north to the coastal regions of the south by the European settlements in the late 1700s and 1800s. Evidence of the Houma Tribe can still be found in this area today.

One of the southernmost of Louisiana's parishes, Terrebonne Parish was established on March 22, 1822, from the southern part of Lafourche Interior, bordering on the Gulf of Mexico. Covering an area of 2100 square miles, it is the second-largest parish in the state. The early French settlers named the parish for the fertility of its soils: terre bonne means "good earth."

In 1834, Terrebonne Parish founded the city of Houma in order to establish a centrally located and more easily accessible parish seat. Prior to this, the county seat had been set at Williamsburg (now Bayou Cane), approximately four miles northwest of present-day downtown Houma. Government officials believed that the site of Houma, at the convergence of six bayous, would provide better access for commerce and development in Terrebonne Parish, as most transportation and shipping was by water. It was near a former settlement of the Houma Tribe of Native Americans. Williamsburg was at the junction of two: Bayou Cane and Bayou Terrebonne.

Richard H. Grinage and Hubert M. Belanger donated one arpent of frontage along Bayou Terrebonne on March 18, 1834 for the new government seat. This land became the foundation around which Houma was developed. Because of this significant donation, Grinage and Belanger are considered the "Fathers of Houma."

Most of the settlers who came to Terrebonne migrated from the Mississippi River, down Bayou Lafourche to Bayou Terrebonne. There was an influx of French colonists from New Orleans to the bayou country in 1762 after the Spanish took over rule of the colony following the French defeat by the British in the Seven Years' War (known as the French and Indian War in North America). The district Spanish commandant granted concessions of title to not more than 630 acres of land for each newcomer to the bayou lands. While many Frenchmen came into the area prior to this, British and Spanish colonists also recorded claims.

Other settlers in the area in 1760 were French colonists from Acadia (modern Nova Scotia), who had been expelled by the British in 1755 during the Seven Years' War. They became known as "Cajuns" (Acadians). Many settled on the banks of the bayous in Terrebonne Parish. They chose this area because of its isolated geographic location, a minimum of government control, fertile land, and an abundance of fish and wildlife. These people lived in relative cultural seclusion for generations and continued their family traditions of living off the land. Today they celebrate their heritage through their festivals and church fairs.

In 1848, Houma was incorporated as a city by an act of legislature. By this time, industry in Houma consisted largely of plantations for sugar cane, the harvesting of seafood, fur trading, and logging industries. The cultivation of sugar cane was the principal agricultural industry in the parish. The first plantation in the parish was established in 1828. By 1851, Terrebonne had 110 plantations with 80 sugar houses (small sugar cane mills).

Southdown Plantation was founded in 1828 by the Minor family and developed for sugar cane cultivation and processing. Stephen Minor had served as the Secretary to the Spanish Governor Gayoso of Louisiana. Today, the Minor family home, built in 1858 and enlarged in 1893, serves as the parish museum. The sugar mill was sold in 1979, dismantled and shipped to Guatemala, where it was reassembled. It is still in use today.

Settlers had canals dug between the bayous to decrease travel time within the parish and make trade more efficient. In 1872, a railroad that linked Schriever to Houma became instrumental in increasing trade and travel within and outside the parish.

In 1923, the construction of the Intracoastal Waterway led to the abandonment of the canals. The Intracoastal was later extended to Lafourche Parish and to Bayou Lafourche, increasing Houma's importance as a portal city.

During World War II, Houma was selected for the establishment of a Lighter Than Air Blimp Naval Station, which operated from May 1943 to September 1944. The Navy base, which used blimp squadrons to scan the coastline for enemy vessels, was one of only two blimp stations operating on the Gulf Coast.

Terrebonne has depended on natural resources: oysters, shrimp, crabs and fish contribute their share of wealth to the parish. The oysters from Terrebonne parish have become internationally known as the finest in the world.

Development of oil and gas resources in the parish began in 1929, bringing a period of economic development and prosperity unparalleled anywhere in the state. The industry grew into enormous dimensions with the discovery of offshore oil. Terrebonne became the gateway to the heaviest concentration of offshore oil service companies in the state. By 1960, with the combination of rich oil production backed by Houma's productive waters, fertile soil, and natural mineral resources, Houma became one of the fastest-growing cities in America. In 1961, the Houma Navigational Canal was completed to provide a 30-mile link to Terrebonne Bay and the Gulf of Mexico.

By the late 1970s, Houma's main focus was the oil industry. Those companies not related to oil and gas depended on this industry for their survival. When the bottom fell out of the oil industry in the early 1980s because of cheaper foreign product and dwindling local resources, Houma fell with it. For nearly two years, the Houma-Terrebonne area experienced an unemployment rate near 25%.

The Houma community has worked to diversify the parish economy. While the oil industry is still the primary source of revenue for the Houma-Terrebonne area, alternative industries are emerging. Terrebonne parish accounts for over 20% of Louisiana's seafood production. In addition, the medical industry is growing in the area. Tourism, too, is a popular source of commerce in and around Houma. The addition of Houma's new Civic Center promises to attract more entertainment and convention revenue to the city.

The parish has been run by the Terrebonne Parish Consolidated Government since it absorbed the powers of the City of Houma. The parish is led by President Michel Claudet, elected in 2007. State Representatives Jerome Zeringue and Beryl Amedee represent Terrebonne Parish in the Louisiana House. 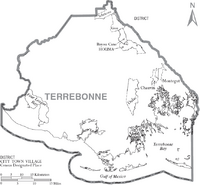 All content from Kiddle encyclopedia articles (including the article images and facts) can be freely used under Attribution-ShareAlike license, unless stated otherwise. Cite this article:
Terrebonne Parish, Louisiana Facts for Kids. Kiddle Encyclopedia.