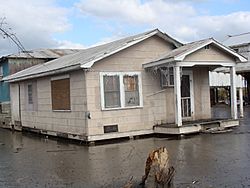 House in Isle de Jean Charles after Hurricane Gustav in 2008.

Isle de Jean Charles (known locally in Louisiana French as Isle à Jean Charles) is a narrow ridge of land situated in Terrebonne Parish, Louisiana. For over 170 years, it has been the historical homeland and burial ground of the state-recognized tribe of the Isle de Jean Charles Band of Biloxi-Chitimacha-Choctaw Indians. Residents of the Island have long been threatened by Louisiana's coastal erosion, as coastal Louisiana loses a landmass the size of Manhattan every year. In 1955, Isle de Jean Charles consisted of over 22,000 acres (8,900 ha) and has since lost about 98% of its land due to saltwater intrusion, and subsidence. In January 2016, the state of Louisiana received substantial funding from the United States Department of Housing and Urban Development to fund the tribe's resettlement to safer ground.

In the 1830s, the Biloxi-Chitimacha-Choctaw tribe's ancestors moved to Isle de Jean Charles to escape the Indian Removal Act and the Trail of Tears. By 1910, the island had grown from a total of 16 families to a total of 77 families. Traditionally, the population of Jean Charles sustained themselves through fishing, oyster farming, trapping and subsistence farming. In the 1930s, a missionary grade school on the mainland was built for the nearby indigenous peoples. Then in 1959, Daigleville Indian High School in Houma, 25 miles inland from the Isle de Jean Charles, became the first Indigenous high school in Luisiana. Until 1953, when the road that connects the island to the mainland was built, the tribe could only commute inland by boat. Unfortunately, due to the fact that the road traveled through open waters, it was extremely susceptible to flooding and erosion, and frequently became uncrossable. In addition, in the 1940s, companies began off shore oil drilling projects and dredging near the island, which contributed to the erosion of the island and island road.

The Isle de Jean Charles was remembered to be over around 5 miles wide and 11 miles long, but today it has shrunk to 1/4 miles wide and 2 miles long. The causes of land loss have been both natural and man made. Hurricanes, such as Katrina in 2005, flooded the area with salt water, ruining homes and causing land subsidence. Rising sea levels also majorly contributed, and continue to contribute, to land loss. Devastating man made disturbances such as dams and levees as well as the dredging of canals for shipping and oil pipelines all eroded the marshland to almost bare nothingness. Additionally. these disturbances have decreased the plant and animal biodiversity in the marshland which has negatively impacted the tribe's quality of life. As a result, most of the Biloxi-Chitimacha-Choctaw members who could afford to move off the island did so. The dispersal of their tribal community disrupted their customs, traditions, and culture. Recent coastal restoration efforts have not been able to salvage the island. Additionally, The Army Corps of Engineers left the Isle de Jean Charles out of levee projects which left the land even more vulnerable to natural disasters than the other surrounding areas. In the early 2000s only about 25 families remained on the island and the Biloxi-Chitimacha-Choctaw's Chief Albert Naquin began tireless efforts to relocate the entire community to save the tribe's culture and traditions. In 2016, over a decade later, the tribe was finally rewarded with a partial victory.

Before the Biloxi-Chitimacha-Choctaw's tribe's victory, an informative and award winning documentary, Cant Stop The Water, was fillmed in 2013 about the community's on going environmental hardships struggles.[1]

Due to lack of government support for flood mitigation and land restoration, the Isle de Jean Charles Tribal Council decided they needed action and assistance for relocation of their whole community. Traditional Chief Albert Naquin and the Tribal Council have seen significant progress towards community resettlement throughout their nearly 20 years of working within the community, developing plans, building partnerships, and conducting outreach. While progress has been made, there have also been multiple setbacks which have stalled momentum.

In 2002, the US Army Corps of Engineers worked with the leadership of the Tribe to identify a nearby site where the community could rebuild. The USACE hired architects for the relocation proposal, with the idea of maintaining a cohesive community to be consistent with the tribe's federal recognition process. But when it came time to vote, the majority of people from Isle de Jean Charles did not want to relocate. The USACE had counted non-residents and members of another tribe in the vote, causing confusion about the Isle de Jean Charles’ community goals. Some residents felt that the government wanted residents to relocate so the oil industry could have free range over the area without interference. Individuals within the tribe often grew up either experiencing or hearing about encounters with multinational oil and gas corporations and land developers taking their tribal and family land. The USACE representatives and others involved failed to recognize the sensitive nature of government representatives raising ideas about relocating a tribal community. Many within the community saw that USACE was lacking knowledge of local internal and intertribal politics, which resulted in counting people from another tribe in the vote to relocate.

The USACE stated that if the community could find an appropriate ridge to build on, they would reconsider including the community in the hurricane protection system. However, the USACE's representatives did not listen to elders on the Island about where to take soil samples, maintaining instead that the cost-benefit ratio was not there to include the community in the levee system. The cost-benefit analysis used to make coastal restoration decisions did not account for the distribution of costs and benefits or important social and cultural factors, such as people’s identity, beliefs, traditions, livelihoods and sacred places. It did not include the social, psychological, and financial costs associated with moving fishing families inland, loss of local knowledge, and the mental stress of being removed from one’s home and traditional life.

In 2008, making another attempt at relocation, the Tribe encountered some issues while planning their move. Residents near the potential new home held concerns about property values decreasing that resembled the fears that led to white flight throughout the United States since the 1950s. As studies have shown, new residents do not decrease property values upon their arrival, but property values decrease as wealthier residents leave. As the restoration process became an object of commodification and racial tension throughout these setbacks, the residents became further displaced, estranged and alienated from the physical environment and denied the input of their local knowledge, which could be an invaluable contribution to the restoration process.

Since 2010 the Isle de Jean Charles community have worked with longtime partners at The Lowlander Center and a team of experts in hazard mitigation, climate adaptation, community planning, architecture, and other relevant fields, to develop their own plans for resettlement guided by local knowledge, the tribe's values, and with the hope of providing a model for other communities threatened by coastal erosion. Finally, on January 21, 2016, the State of Louisiana received $52 million from the Department of Housing and Urban Development to put towards the Isle de Jean Charles resettlement, as part of the National Disaster Resilience Competition (NDRC). The Isle de Jean Charles Resettlement Project was adopted by the state with minimal changes as a component in their application to the NDRC, giving the community renewed hope that the long overdue community-led and locally informed process of resettlement is finally underway.

Environmental impact of oil and gas production in the Terrebonne Parish

Louisiana's Terrebonne Parish has been and continues to be a prime location for oil extraction and production. Oil and gas production corporations have massive influence in the costal communities of Southern Louisiana, with around 90% of land in the Terrebonne Parish belonging to non-local manufacturing companies. The Isle de Jean Charles is entrenched in numerous oil fields that are still utilized by oil manufactures. Construction and development of oil-rigs and pipelines continue to disrupt the geography of the wetlands.

In the late 1920s, the Texas based Oil Corporation Texaco began to explore the bayous and marshlands of Louisiana in search of new sources of oil. To facilitate this endeavor, land leases were negotiated between Texaco (and other oil extraction enterprises), the Louisiana Land & Exploration Company, and the State of Louisiana. Oil was first discovered in the Terrebonne Parish in 1929.  Texaco and other groups quickly monopolized on this discovery.

In order to facilitate the extraction and transportation of oil and natural gas, the Houma Navigation Canal was built. This waterway connected the Terrebonne Parish's largest and only city, Houma, to the Gulf of Mexico and was completed in 1962. This man-made waterway has been thought to have directly contributed to the degradation of the wetlands of southern Louisiana, especially those in the Terrebonne Parish. Higher levels of water salinity from the adjacent bay and the increase of artificial waterways, pipelines, and other smaller navigation canals have seriously exacerbated the degradation of the wetlands east of the Houma Navigation Canal, where the Isle de Jean Charles is located.

All content from Kiddle encyclopedia articles (including the article images and facts) can be freely used under Attribution-ShareAlike license, unless stated otherwise. Cite this article:
Isle de Jean Charles, Louisiana Facts for Kids. Kiddle Encyclopedia.