Currie is a city in Murray County, Minnesota, United States. The population was 233 at the 2010 census. Lake Shetek State Park is nearby. The city is known as the "Gateway to Lake Shetek". Currie is notable for its tourism, cuisine, and recreational opportunities. It is home to Lakeside Hideaway and the End-O-Line Railroad Park & Museum in addition to being the headquarters of Schmitz Grain. Along with the census-designated area The Lakes, Minnesota, the Currie area has a population of close to 1,000 residents.

According to the United States Census Bureau, the city has a total area of 0.57 square miles (1.48 km2), all of it land.

Minnesota State Highway 30 and Murray County Road 38 are the main routes in the community. U.S. Highway 59 is nearby.

There were 114 households of which 19.3% had children under the age of 18 living with them, 44.7% were married couples living together, 8.8% had a female householder with no husband present, 3.5% had a male householder with no wife present, and 43.0% were non-families. 38.6% of all households were made up of individuals and 16.7% had someone living alone who was 65 years of age or older. The average household size was 2.04 and the average family size was 2.68.

There were 109 households out of which 18.3% had children under the age of 18 living with them, 49.5% were married couples living together, 8.3% had a female householder with no husband present, and 38.5% were non-families. 33.9% of all households were made up of individuals and 16.5% had someone living alone who was 65 years of age or older. The average household size was 2.06 and the average family size was 2.63.

Currie was laid out in 1872 around a gristmill built by Neil and Archibald Currie. A post office has been in operation at Currie since 1874. 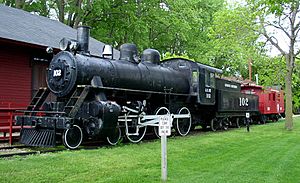 End-O-Line Park is nestled on the northern edge of Currie. Founded in 1872 by Neil and Archibald Currie, this place was thought to be the most beautiful country with the Des Moines River moving across the prairie and Lake Shetek in the west. The park is located along Murray County Road 38 near Minnesota Highway 30.

The railroads were the first great achievement in transportation of the machine age. This achievement led to the expansion and growth of the West. It is this story, as well as the story of the area, which the museum is trying to tell.

A model railroad display, in HO scale, is one of the highlights of the museum. This display is an authentic reproduction of the Currie railroad yards as they were around the turn of the 20th Century. The layout features scratch-built locomotives and structures, complete landscaping, a full wrap-around mural, complete sound effects and more. Visitors can hear the old steam locomotive puff and chug throughout the countryside, which is accented by the steam whistle, bell and hiss of steam.

District Number One, the Sunrise School, was moved to End-O-Line Park and restored by the Murray County Historical Society. The embossed tin ceilings and walls, vertical wainscoting, recitation bench and many blackboards are typical, but the triangular sunrise worked into the front and back of the schoolhouse are unique. The little one-room school with tin dinner pails, water cooler, wash basin, old world maps, bell tower and rope, ink wells and cloakrooms, will bring back fond memories to share with children.

End-O-Line Park's section house, originally located in Comfrey, was built by Chicago and Northwestern for a section foreman and his family. A saltbox structure, the house has been restored to the early 1900 style.

Currie has many outdoor activities available to the general public. These include the seven-mile bike trail that goes through Lake Shetek State Park, Lake Shetek, and local farmland. The Shetek Lake is located just north of town, and a popular vacation destination for people from all over Southwest Minnesota. The lake has a population of approximately 600, and more during the summer months. The area of Currie/Lake Shetek has a combined population of almost 1,000 residents during the summer months.

All content from Kiddle encyclopedia articles (including the article images and facts) can be freely used under Attribution-ShareAlike license, unless stated otherwise. Cite this article:
Currie, Minnesota Facts for Kids. Kiddle Encyclopedia.