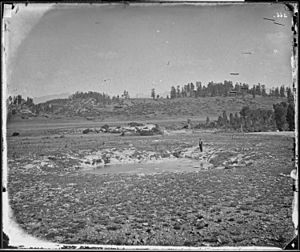 The springs for which the town was named, photographed in 1874

Pagosa Springs is a municipality that is the county seat of, and the only incorporated municipality in, Archuleta County, Colorado, United States. The population was 1,727 at the 2010 census. Approximately 65 percent of the land in Archuleta County is either San Juan National Forest, Weminuche and South San Juan Wilderness areas, or Southern Ute Indian land.

Pagosa Springs and the surrounding county are both experiencing a substantial influx of second-home owners; a 2006 property assessment indicates that 60% of area private properties are owned by non-residents.

Pagosa Springs is located approximately 35 miles (56 km) north of the New Mexico border, nestled at 7,000 feet (2,100 m) on the Western Slope of the Continental Divide. This combination of high desert plateau and dramatic Rocky Mountains to the north and east creates an unusually mild climate, especially in the summer months, when compared with much of the surrounding Southwest. Pagosa is favored with around 300 days of sun each year, as well as four distinct seasons.

The town is located in the upper San Juan Basin, surrounded by the 3 million acre (12,000 km²) San Juan National Forest, and adjacent to the largest wilderness area in the state of Colorado, the Weminuche Wilderness.

The town is named for the sulfur springs located there, including the world's deepest geothermal hot spring. This "Mother Spring" feeds the pools hosted by three local hot spring soaking locations within town. The largest is at The Springs Resort & Spa which hosts the mother spring. Other hot springs facilities in town are the Healing Waters Resort and Spa and the Overlook Hot Springs Spa. The mineral-rich water continues to be celebrated for its therapeutic powers. The Utes called the sulfur-rich mineral springs Pah gosah, which is commonly translated in modern documents as "healing waters"; a Ute elder once translated the phrase as "water (pah) that has a bad smell (gosah)."

Visitors from all over the world come to enjoy its hot baths. Some come to cure ailments, others to simply relax in the mineral-rich waters.

Other recreational activities in the area include downhill and cross country skiing at nearby Wolf Creek ski area. Snowmobiling in the surrounding National Forest is also quite popular. Summertime activities include fishing, hiking, and rafting. Come autumn, the area is a popular destination for hunters, who harvest elk, deer, and other game animals.

"Downtown Pagosa Springs" was the final destination for a duo of truckers in the 1975 country song "Wolf Creek Pass" by C. W. McCall. U.S. Highway 160 from the pass to town goes through a vertical drop of around 5,000 feet (1,500 m), and is described in the song as "hairpin county and switchback city". 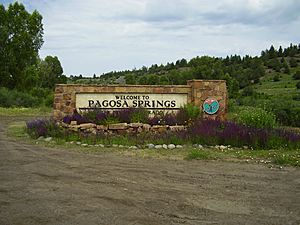 There were 633 households out of which 32.4% had children under the age of 18 living with them, 46.1% were married couples living together, 13.6% had a female householder with no husband present, and 34.4% were non-families. 27.8% of all households were made up of individuals and 10.3% had someone living alone who was 65 years of age or older. The average household size was 2.48 and the average family size was 3.07.

All content from Kiddle encyclopedia articles (including the article images and facts) can be freely used under Attribution-ShareAlike license, unless stated otherwise. Cite this article:
Pagosa Springs, Colorado Facts for Kids. Kiddle Encyclopedia.