The Grand Valley is an extended populated valley, approximately 30 miles (48 km) long and 5 miles (8 km) wide, located along the Colorado River in Mesa County, Colorado and Grand County, Utah in the United States. The valley contains the city of Grand Junction, as well as other smaller communities such as Fruita, and Palisade. The valley is noted as a major fruit growing region, with a large number of orchards. It takes its name from the "Grand River", the historical name of the Colorado River upstream from its confluence with the Green River that was used by locals in the late 19th and early 20th century. The valley is the most densely populated area on the Colorado Western Slope, with Grand Junction serving as an unofficial capital of the region, as a counterpoint to Denver on the eastern slope of the Rocky Mountains in the Colorado Front Range. Interstate 70 and U.S. Highway 6 run through the valley from west-to-east. The Grand Valley is part of the larger Colorado Plateau desert lands.

The valley begins where the Colorado River widens at the mouth of De Beque Canyon to the east of Palisade, then follows a wide arc bending to the west/southwest. The Colorado receives the Gunnison River, one of its major tributaries, just south of Grand Junction near the midpoint of the valley. The valley is surrounded by large plateau formations, including the Bookcliffs along the north side, the Grand Mesa along the southeast side, and the Uncompahgre Plateau to the southwest. Colorado National Monument sits on a ridge on the southwest side of the valley west of Grand Junction. Much of the surrounding table land areas rimming the valley are public lands controlled by the Bureau of Land Management. 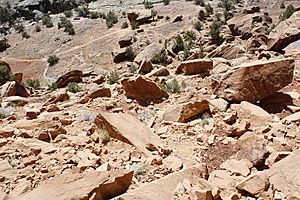 The valley was an area historically occupied by the Ute people. White settlers began to arrive in the 1880s, farming the valley for a variety of grains and fruits. In the 1890s, it was discovered that sugar beets grown in the valley had a high sugar content, leading to widespread cultivation of that crop. At the turn of the 20th century, evaporation techniques allowed fruit growers to ship their products more efficiently to distant markets, yielding an expansion of fruit growing in the valley. In 1918, the Government_Highline_Canal was completed to provide water to cultivate 50,000 acres (20.0 km²) in the valley. The project included a roller dam in De Beque Canyon, the largest of three such dams of this type in the nation.

According to local legend, the valley was cursed by the native Utes upon their forced exodus to federal reservation grounds in Utah. The legend states, among other things, that no person born in the valley may leave permanently unless a small amount of sand is collected from the Grand Mesa, Bookcliffs, Colorado National Monument, and/or the junction of the Gunnison and Colorado rivers. The sand is supposed to alleviate the curse's effects of a supernatural and metaphysical attraction by the valley's soil to the native individual. Of course, this is a myth and cannot be confirmed. However, many exiting locals, native and non-native alike, prefer not to take their chances with the alleged curse and keep the sand long after emigrating from the valley.

All content from Kiddle encyclopedia articles (including the article images and facts) can be freely used under Attribution-ShareAlike license, unless stated otherwise. Cite this article:
Grand Valley (Colorado-Utah) Facts for Kids. Kiddle Encyclopedia.