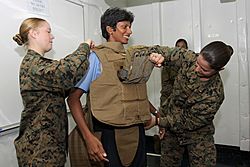 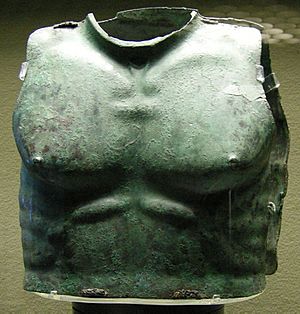 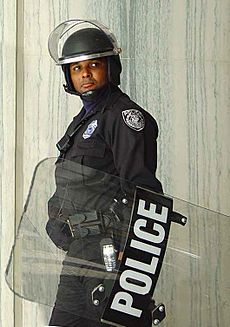 An American police officer wears a helmet and carries a riot shield. October 2002

Modern body armour (personal armour/armor or body armor) is protective clothing. It is designed to absorb and/or deflect slashing, bludgeoning, and penetrating attacks.

It was first used to protect soldiers, today it is used to protect riot police, private security guards and bodyguards. There are two different types of armour. There is regular non-plated personal armor used by most police, security guards and bodyguards. There is also hard-plate reinforced personal armor, which is used by combat soldiers, police tactical units and hostage rescue teams.

Armour is certainly very ancient, but it was little used in infantry warfare for quite a long time, with the exception of helmets. From about the 18th century to the Vietnam war, men fought relatively unprotected. The weight and cost of effective armour meant it was no longer practical to have infantrymen armoured.

The invention of carbon fibre, modern hard ceramics and various plastic compounds are suitable for light armour which is effective in many circumstances. Kevlar, Technora and Nomex are Aramids, which are long-chain aromatic polyamides. They are used to make bullet resistant vests and bullet resistant face masks. The PASGT helmet and vest used by United States military forces since the early 1980s both have Kevlar as a main component, as do their replacements. Most of these items have padding on the inside to act as shock-absorbers, and to increase comfort during while being worn.

So, with the lighter weight and increased stopping-power of personal armour, the modern soldier is once again protected against most of the weapons of the day.

In December 2009, during the War in Afghanistan, a British soldier in southern Helmand Province, survived a shot to the back during an operation to clear insurgents from a village, protected by the body armor kit he was wearing.

(...) I was hit in the back by a single shot. It must have been from about 200–300 metres away. The round knocked me down in an instant, it felt like being hit by a sledge-hammer at full swing. I slammed into the dirt face down. (...) I was in agony, I certainly couldn't walk on my own (...) I think it was a 7.62mm round. That's a high calibre bullet to be hit by, but it shows you that the body armour works. I wouldn't be sitting here now telling you this story, if I wasn't wearing one. Thank you to whoever designed the body armour. If I ever meet them, I'd like to buy them a pint.

All content from Kiddle encyclopedia articles (including the article images and facts) can be freely used under Attribution-ShareAlike license, unless stated otherwise. Cite this article:
Body armour Facts for Kids. Kiddle Encyclopedia.