The Roman Kingdom (Latin: Regnum Romanum) was the monarchical government of the city of Rome and its territories. No written records from that time survive. The histories about it were written during the Republic and Empire and are largely based on legend. Therefore, not much is certain about the history of the Roman Kingdom.

However, the history of the Roman Kingdom began with the city's founding, traditionally dated to 753 BC, and ended with the overthrow of the kings and the establishment of the Republic in about 509 BC.

What eventually became the Roman Empire began as settlements around the Palatine Hill along the river Tiber in central Italy. The river was navigable up to that place. The site also had a ford where the Tiber could be crossed. The Palatine Hill and hills surrounding it presented easily defensible positions in the wide fertile plain surrounding them. All these features contributed to the success of the city.

The traditional account of Roman history is that in Rome's first centuries, it was ruled by a succession of seven kings. The traditional chronology is discounted by modern scholarship. The Gauls destroyed all of Rome's historical records when they sacked the city after the Battle of the Allia in 390 BC or 387/6, so no contemporary records of the kingdom exist. All accounts of the kings must be questioned.

After Romulus, who among other things created the Senate, there were, according to legend, six more kings: Numa Pompilius, Tullo Ostilio, Anco Marzio, Tarquinius Priscus, Servius Tullius, and Tarquinius Superbus. Following Romulus death the Roman Senate was not able to elect a new king and after much debate between Romans and Sabines they agreed to allow the Curiate Assembly to vote in a new king of Rome. They chose Numa Pompilius. Numa, unlike Romulus, was against war and thought the best course for Rome was peace, Numa is credited with bringing religion into the average Roman everyday life.

The power of the kings was almost absolute, though the Senate had some influence. There was one big exception: kingship was not hereditary.

Election of the kings

Whenever a king died, Rome entered a period of interregnum. Supreme power of the state would go to the Senate, which was responsible for finding a new king. The Senate would assemble and appoint one of its own members—the interrex—to serve for a period of five days with the sole purpose of nominating the next king of Rome.

Once proposed to the Assembly, the people of Rome could either accept or reject him. If accepted, the king-elect did not immediately enter office. Two other acts still had to take place before he was invested with the full regal authority and power.

First, it was necessary to obtain the divine will of the gods respecting his appointment by means of the auspices, since the king would serve as high priest of Rome. This ceremony was performed by an augur, who conducted the king-elect to the citadel where he was placed on a stone seat as the people waited below. If found worthy of the kingship, the augur announced that the gods had given favorable tokens, thus confirming the king’s priestly character.

The second act which had to be performed was the conferral of the imperium upon the king. The Assembly’s previous vote only determined who was to be king, and had not by that act bestowed the necessary power of the king upon him. Accordingly, the king himself proposed to the Assembly a law granting him imperium, and the Assembly by voting in favor of the law would grant it.

In theory, the people of Rome elected their leader, but the Senate had most of the control over the process.

Romulus was Rome's first king and the city's founder, the two names are clearly linked. In 753 BC, Romulus began building the city upon the Palatine Hill. After founding and naming (as the story goes) Rome, he permitted men of all classes to come to Rome as citizens, including slaves and freemen without distinction. To provide his citizens with wives, Romulus invited the neighboring tribes to a festival in Rome. Romulus shared the kingship with the Sabine king Titus Tatius.

Romulus selected 100 of the best men to form the Roman senate as an advisory council to the king. These men he called patres, and their descendants became the patricians. He also divided the general populace into thirty curiae, named after thirty of the Sabine women who had intervened to end the war between Romulus and Tatius. The curiae formed the voting units in the Roman assemblies: Comitia Curiata. 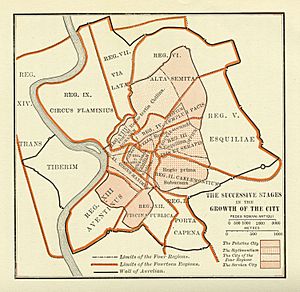 Growth of the city region during the kingdom

All content from Kiddle encyclopedia articles (including the article images and facts) can be freely used under Attribution-ShareAlike license, unless stated otherwise. Cite this article:
Roman Kingdom Facts for Kids. Kiddle Encyclopedia.