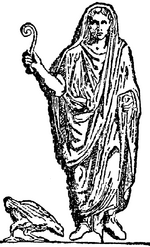 An augur holding a lituus, the curved wand often used as a symbol of augury on Roman coins

The augur was a priest and official in the classical Roman world. His main role was the practice of augury, interpreting the will of the gods by studying the flight of birds: whether they are flying in groups or alone, what noises they make as they fly, direction of flight and what kind of birds they are. This was known as "taking the auspices". The ceremony and function of the augur was central to any major undertaking in Roman society—public or private—including matters of war, commerce, and religion.

All content from Kiddle encyclopedia articles (including the article images and facts) can be freely used under Attribution-ShareAlike license, unless stated otherwise. Cite this article:
Augur Facts for Kids. Kiddle Encyclopedia.