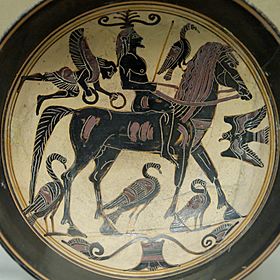 A confident rider, surrounded by birds of good omen is approached by a Nike bearing victor's wreaths on this Laconian black-figured kylix, ca. 550–530 BC

Augury is the practice from ancient Roman religion of interpreting omens from the observed flight of birds (aves). When the individual, known as the augur, interpreted these signs, it is referred to as "taking the auspices". 'Augur' and 'auspices' are from the Latin auspicium and auspex, literally "one who looks at birds." Depending upon the birds, the auspices from the gods could be favorable or unfavorable (auspicious or inauspicious). Sometimes bribed or politically motivated augures would fabricate unfavorable auspices in order to delay certain state functions, such as elections. Pliny the Elder attributes the invention of auspicy to Tiresias the seer of Thebes, the generic model of a seer in the Greco-Roman literary culture.

This type of omen reading was already a millennium old in the time of Classical Greece: in the fourteenth-century BC diplomatic correspondence preserved in Egypt called the "Amarna correspondence", the practice was familiar to the king of Alasia in Cyprus who needed an 'eagle diviner' to be sent from Egypt. This earlier, indigenous practice of divining by bird signs, familiar in the figure of Calchas, the bird-diviner to Agamemnon, who led the army (Iliad I.69), was largely replaced by sacrifice-divination through inspection of the sacrificial victim's liver—haruspices—during the Orientalizing period of archaic Greek culture. Plato notes that hepatoscopy held greater prestige than augury by means of birds.

One of the most famous auspices is the one which is connected with the founding of Rome. Once the founders of Rome, Romulus and Remus, arrived at the Palatine Hill, the two argued over where the exact position of the city should be. Romulus was set on building the city upon the Palatine, but Remus wanted to build the city on the strategic and easily fortified Aventine Hill. The two agreed to settle their argument by testing their abilities as augures and by the will of the gods. Each took a seat on the ground apart from one another, and, according to Plutarch, Remus saw six vultures, while Romulus saw twelve.

All content from Kiddle encyclopedia articles (including the article images and facts) can be freely used under Attribution-ShareAlike license, unless stated otherwise. Cite this article:
Augury Facts for Kids. Kiddle Encyclopedia.