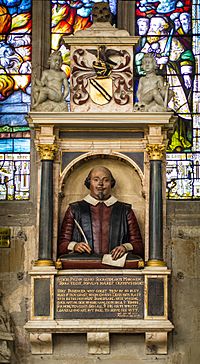 The Shakespeare funerary monument is a memorial to William Shakespeare located inside Holy Trinity Church at Stratford-upon-Avon, the church in which Shakespeare was baptised and where he was buried in the chancel two days after his death.

The monument, carved in pale blue limestone by Gerard Johnson, is mounted on the north wall of the chancel. It features a demi-figure of the poet holding a quill pen in one hand and a piece of paper resting on a cushion in the other. The style, which was popular from the early- to the mid-17th century, was most commonly used to memorialize divines, academics, and those professions with pretensions of learning. The buttoned doublet, with its ornamental slashes, was probably originally painted scarlet, the loose subfusc gown black, the eyes hazel, and the hair and beard auburn. It has been retouched many times, and was painted entirely white in 1793. This demi-figure is one of only two representations definitely accepted as accurately portraying William Shakespeare's physical appearance. The monument is topped with strapwork rising to a heraldic shield displaying Shakespeare's arms, on either side of which sits an allegorical figure: one, representing Labour, holds a spade, the other, representing Rest, holds an inverted torch and a skull.

The two columns that support the entablatures and coat-of-arms above the bust are of black polished marble. The two putti and the skull are of sandstone, and the capitals and bases of the columns are of gilded sandstone. The architraves, frieze and cornice were originally of red-veined white alabaster, but they were replaced in 1749 with white marble. The effigy and the cushion are carved of one piece of bluish Cotswold limestone, and the inlaid panels are of black touchstone.

The date the monument was erected is not known exactly, but it must have been before 1623; in that year, the First Folio of Shakespeare's works was published, prefaced by a poem by Leonard Digges that mentions "thy Stratford moniment" [sic]. John Weever transcribed the monument inscription and grave epitaph, and H. R. Woudhuysen's analysis of the undated manuscript suggests that his visit to Stratford was made not much later than 1617–18. The monument was restored in 1748–49 and has been repainted several times. 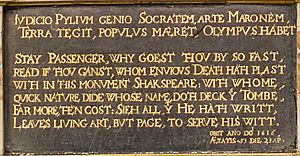 The memorial plaque on Shakespeare's monument

Beneath the figure is engraved an epitaph in Latin and a poem in English. The epitaph reads:

The first line translates as "A Pylian in judgement, a Socrates in genius, a Maro in art," comparing Shakespeare to Nestor the wise King of Pylos, to the Greek philosopher Socrates, and to the Roman poet Virgil (whose last name, or cognomen was Maro). The second reads "The earth buries him, the people mourn him, Olympus possesses him," referring to Mount Olympus, the home of the Greek gods.

Stanley Wells is one of the few biographers to comment on the poem, saying that it "somewhat cryptically calls on the passer-by to pay tribute to his greatness as a writer", and admitting "the only sense I can make out of the last bit is that his compositions relegate the sculptor's art to the rank of a mere page – with perhaps a forced pun on the writer's 'pages' – offering service to his genius; or perhaps that all art subsequent to Shakespeare's is a page – servant – to his." Wells also points out that "his name does not deck the tomb, and it's not a tomb anyway", suggesting that it may have been originally designed to be part of a free-standing tomb.

Beneath the poem, in smaller lettering, an inscription gives the details of his death in abbreviated Latin: died the year of the Lord 1616, in his 53rd year, on 23 April. 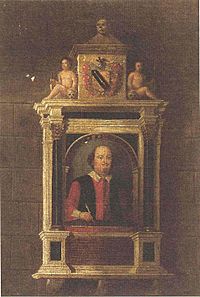 The monument was first illustrated and discussed in print in Sir William Dugdale's Antiquities of Warwickshire (1656) in which Dugdale wrote that Stratford "gave birth and sepulture to our late famous Poet Will. Shakespere, whose Monument I have inserted in my discourse of the Church." The engraving, almost certainly by Wenceslaus Hollar, was done from an original rough sketch made by Dugdale, probably in 1649, likely under the patronage of Shakespeare's granddaughter (and last living descendant), Elizabeth Barnard. Both depictions exhibit marked differences from the monument as it appears today: the poet is not shown holding a quill or paper, and the cushion appears to be tipped up against his body. The art critic Marion Spielmann described it as giving the impression that Shakespeare was pressing the cushion to his groin, "which, for no reason, except perhaps abdominal pains, is hugged against what dancing-masters euphemistically term the 'lower chest'". The print was copied by later engravers.

In 1725, Alexander Pope's edition of Shakespeare's works included the first fairly accurate engraving of the monument, made by George Vertue in 1723. A drawing of the monument in situ by Vertue also survives. An account by John Aubrey, written in the early 1670s (but possibly based on observations made a decade or two earlier), describes Shakespeare as wearing "a Tawny satten doublet I thinke pinked and over that a black gowne like an Under-gratuates at Oxford, scilicet the sleeves of the gowne doe not cover the armes, but hang loose behind".

The monument was restored in 1748–49. Parson Joseph Greene, master of Stratford grammar school, organised the first known performance of a Shakespeare play in Stratford to fund the restoration. John Ward's company agreed to perform Othello in the Town Hall on 9 September 1746, with all receipts going to help pay for the restoration.

Writing soon after the restoration, Greene wrote that "the figure of the Bard" was removed to be "cleansed of dust &c". He noted that the figure and cushion were carved from a single piece of limestone. He added that "care was taken, as nearly as could be, not to add to or diminish what the work consisted of, and appear'd to have been when first erected: And really, except changing the substance of the Architraves from alabaster to Marble; nothing has been chang'd, nothing alter'd, except supplying with original material, (sav'd for that purpose,) whatsoever was by accident broken off; reviving the Old Colouring, and renewing the Gilding that was lost". John Hall, the limner from Bristol hired to do the restoration, painted a picture of the monument on pasteboard before 1748. Greene also had a plaster cast of the head made before the restoration began.

Shakespeare's pen has been repeatedly stolen and replaced since, and the paint has been renewed. In 1793 Edmond Malone, the noted Shakespeare scholar, persuaded the vicar to paint the monument white, in keeping with the Neoclassical taste of the time. The paint was removed in 1861 and the monument was repainted in the colours recovered from beneath the white layer.

In 1973 intruders removed the figure from its niche and tried to chip out the inscription. Local police took the view that they were looking for valuable Shakespeare manuscripts, which were rumoured to be hidden within the monument. According to Sam Schoenbaum, who examined it after the incident, the figure suffered only "very slight damage".

All content from Kiddle encyclopedia articles (including the article images and facts) can be freely used under Attribution-ShareAlike license, unless stated otherwise. Cite this article:
Shakespeare's funerary monument Facts for Kids. Kiddle Encyclopedia.