Monument to the Great Fire of London facts for kids 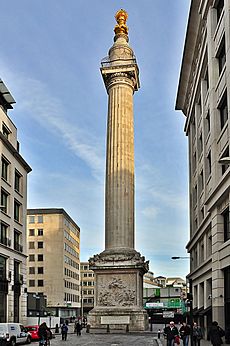 Viewing platform at the top of the Monument.

It stands at the junction of Monument Street and Fish Street Hill, 202 ft (62 m) tall and 202 ft (62 m) from the spot in Pudding Lane where the Great Fire started on 2 September 1666. Another monument, the Golden Boy of Pye Corner, marks the point near Smithfield where the fire was stopped. Constructed between 1671 and 1677, it was built on the site of St. Margaret's, Fish Street, the first church to be burnt down by the Great Fire.

The Monument comprises a fluted Doric column built of Portland stone topped with a gilded urn of fire. It was designed by Christopher Wren and Robert Hooke. Its height marks its distance from the site of the shop of Thomas Farriner (or Farynor), the king's baker, where the Great Fire began.

The top of the Monument is reached by a narrow winding staircase of 311 steps. A mesh cage was added in the mid-19th century at the top to prevent people jumping off.

Three sides of the base carry inscriptions in Latin. The one on the south side describes actions taken by King Charles II following the fire. The one on the east describes how the Monument was started and brought to perfection, and under which mayors. Inscriptions on the north side describe how the fire started, how much damage it caused, and how it was eventually extinguished. The Latin words "Sed Furor Papisticus Qui Tamdiu Patravit Nondum Restingvitur" (but Popish frenzy, which wrought such horrors, is not yet quenched) were added to the end of the inscription on the orders of the Court of Aldermen in 1681 during the foment of the Popish Plot. Text on the east side originally falsely blamed Roman Catholics for the fire ("burning of this protestant city, begun and carried on by the treachery and malice of the popish faction"), which prompted Alexander Pope (himself a Catholic) to say of the area:

The words blaming Catholics were chiselled out with Catholic Emancipation in 1830.

The west side of the base displays a sculpture, by Caius Gabriel Cibber, in alto and bas relief, of the destruction of the City; with Charles II and his brother, James, the Duke of York (later James II), surrounded by liberty, architecture, and science, giving directions for its restoration.

It is a Grade I listed building and a scheduled monument. 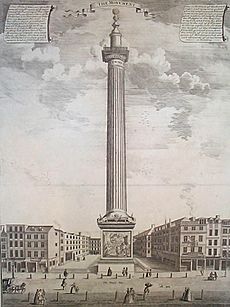 The Monument depicted in a picture by Sutton Nicholls, c. 1753.

The first Rebuilding Act, passed in 1669, stipulated that "the better to preserve the memory of this dreadful visitation", a column of either brass or stone should be set up on Fish Street Hill, on or near the site of Farynor's bakery, where the fire began. Christopher Wren, as surveyor-general of the King's Works, was asked to submit a design. Wren worked with Robert Hooke on the design of the monument. It is impossible to disentangle the collaboration between Hooke and Wren, but Hooke’s drawings of possible designs for the column still exist, with Wren’s signature on them indicating his approval of the drawings rather than their authorship. It was not until 1671 that the City Council approved the design, and it was another six years before the 202 ft column was complete. It was two more years before the inscription (which had been left to Wren — or to Wren's choice — to decide upon) was set in place. "Commemorating — with a brazen disregard for the truth — the fact that 'London rises again...three short years complete that which was considered the work of ages.'" 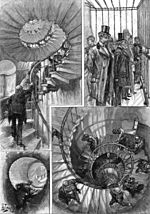 Views published in The Graphic, 1891.

Hooke’s surviving drawings show that several versions of the monument were submitted for consideration: a plain obelisk, a column garnished with tongues of fire, and the fluted Doric column that was eventually chosen. The real contention came with the problem of what type of ornament to have at the top. Initially, Wren favoured a statue of a phoenix with outstretched wings rising from the ashes, but as the column neared completion he decided instead on a 15 ft statue either of Charles II, or a sword-wielding female to represent a triumphant London; the cost of either being estimated at £1,050. Charles himself disliked the idea of his statue atop the monument and instead preferred a simple copper-gilded ball "with flames sprouting from the top", costing a little over £325, but ultimately it was the design of a flaming gilt-bronze urn suggested by Robert Hooke that was chosen.

The total cost of the monument was £13,450 11s 9d., of which £11,300 was paid to the mason-contractor Joshua Marshall. (Joshua Marshall was Master of The Worshipful Company of Masons of The City of London in 1670)

The Edinburgh-born writer James Boswell visited the Monument in 1763 to climb the 311 steps to what was then the highest viewpoint in London. Halfway up, he suffered a panic attack, but persevered and made it to the top, where he found it "horrid to be so monstrous a way up in the air, so far above London and all its spires".

The area around the base of the column, Monument Street, was pedestrianised in 2006 in a £790,000 street improvement scheme.

Between 1 and 2 October 2011, a Live Music Sculpture created especially for the Monument by British composer Samuel Bordoli was performed 18 times during the weekend. This was the first occasion that music had ever been heard inside the structure and effectively transformed Wren's design into a gigantic reverberating musical instrument.

As a scientific instrument

Wren and Hooke built the monument to double-up as a scientific instrument. It has a central shaft meant for use as a zenith telescope and for use in gravity and pendulum experiments that connects to an underground laboratory for observers to work (accessible from the present-day ticket booth). Vibrations from heavy traffic on Fish Street Hill rendered the experimental conditions unsuitable.

A hinged lid in the urn covers the opening to the shaft. The steps in the shaft of the tower are all six inches high, allowing them to be used for barometric pressure studies.

During the 2007–2009 refurbishment, a 360-degree panoramic camera was installed on top of the Monument. Updated every minute and running 24 hours a day, it provides a record of weather, building and ground activity in the City.

Panorama of London taken from the top of the Monument 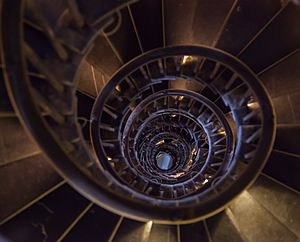 View down the interior staircase. 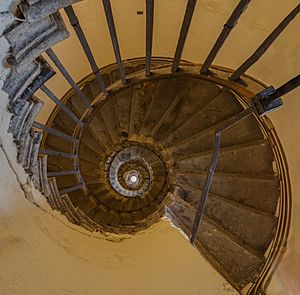 William Godwin, in his novel Deloraine (1833), suggests that, like "the man we are told of, who climbed over the rails at the top of the Monument of London, and clung to them for a while on the outside, there was not room for repentance", meaning that there was no way for the hero, who has just killed his rival, to go back (147).

Charles Dickens, in his novel Martin Chuzzlewit, published in 1844, describes the Monument thus:

if the day were bright, you observed upon the house–tops, stretching far away, a long dark path; the shadow of the Monument; and turning round, the tall original was close beside you, with every hair erect upon his golden head, as if the doings of the city frightened him.

The Monument is a prominent setting in The System of the World, the third book in Neal Stephenson's Baroque Cycle. George, the hero of Charlie Fletcher's children's book about unLondon Stoneheart, has a fight at the top of the Monument with a raven and a gargoyle.

The Monument is a key location in The Bloodless Boy, a novel by Robert J. Lloyd. Robert Hooke, who designed the Monument with Christopher Wren, investigates the sinister murder of a blood drained boy discovered on the banks of the River Fleet. Harry Hunt, Robert Hooke's assistant, is chased up to the top of the monument after witnessing a murder.

All content from Kiddle encyclopedia articles (including the article images and facts) can be freely used under Attribution-ShareAlike license, unless stated otherwise. Cite this article:
Monument to the Great Fire of London Facts for Kids. Kiddle Encyclopedia.