Tower Hamlets Cemetery Park is a local nature reserve and historic cemetery in the London Borough of Tower Hamlets within the East End of London. It is regarded as one of the seven great cemeteries of the time (now known as the "Magnificent Seven").

The cemetery opened in 1841 and closed for burials in 1966, since which and other land has been added to the park, including "Scrapyard Meadow".

It was originally named The City of London and Tower Hamlets Cemetery but was called Bow Cemetery by locals. The cemetery pre-dates the creation of the modern Borough of Tower Hamlets in 1965, and instead takes its name from the original, older and somewhat larger, Tower Hamlets (or Tower division) – from which the modern borough also takes its name. The historic parish boundary which defines the Mile End and Bromley-by-Bow areas runs north to south through the park, with Mile End to the west and Bromley-by-Bow to the east.

The Main Gate is on Southern Grove (on the crossing with Hamlets Way). There are also small gates on Hamlet Way and Cantrell Road. The nearest tube stations are Mile End and Bow Road.

Before the Victorian era, all of London's dead were buried in small urban churchyards, which were so overcrowded and so close to where people lived, worked, and worshipped that they were causing disease and ground water contamination.

An Act of Parliament was passed which allowed joint-stock companies to purchase land and set up large cemeteries outside the boundaries of the City of London. There were seven great cemeteries (the "Magnificent Seven") laid out about the same time (1832–41). Highgate Cemetery is the most well known; the others are Nunhead, West Norwood, Kensal Green, Brompton, Abney Park.

The City of London and Tower Hamlets Cemetery Company was made up of eleven wealthy directors whose occupations reflected the industries of the day: corn merchant, merchant ship broker and ship owner, timber merchant, and Lord Mayor of the City of London. The company bought 27 acres (109,265 m2) of land and the cemetery was divided into a consecrated part for Anglican burials and an unconsecrated part for all other denominations.

Tower Hamlets Cemetery was formally consecrated by the Bishop of London Charles James Blomfield on Saturday 4 September 1841 prior to being opened for burials. The cemetery was consecrated in the morning; the first burial took place in the afternoon. 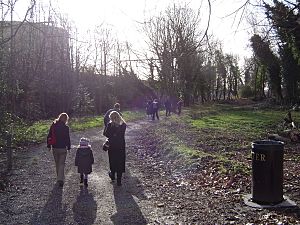 Walking in the Park

Tower Hamlets Cemetery was very popular with people from the East End and by 1889 247,000 bodies had been interred; the cemetery remained open for another 77 years. In the first two years 60% of the burials were in public graves and by 1851 this had increased to 80%. Public graves were the property of the company and were used to bury those whose families could not afford to buy a plot. Several persons, entirely unrelated to each other, could be buried in the same grave within the space of a few weeks. Allegedly some graves were dug 40 feet deep and contained up to 30 bodies.

The cemetery itself did not remain in a tidy and elegant state for long. Only 55 years after it was opened it was reported to be in a neglected state. During the Second World War the cemetery was bombed five times during raids on the City of London; both cemetery chapels were damaged and shrapnel damage can be seen on the graves by the 1994 Soanes Centre in the north-west corner of the park. Burials continued taking place until 1966, when the Greater London Council (G.L.C.) bought the company for £100,000 under the G.L.C.(General Powers) Act and the ground was closed for burials. The intention was to create an open space for the public and relevant parts of the cemetery were freed from the effects of consecration. In October 1967 a further £125,000 was spent clearing the chapels and 0.68 acres (2,752 m2) of graves. Strong local opposition and problems of funding stopped the clearance.

Tower Hamlets London Borough Council took over the ownership of the park in 1986. It was declared a Local Nature Reserve in May 2000 along with adjacent open land on Cantrell Road and Ackroyd Drive. It has also been designated as Site of Metropolitan Importance for Nature Conservation and a Conservation area. The high brick walls which surround it are on the national register of listed buildings as are seven individual memorials (all Grade II).

The Friends of Tower Hamlets Cemetery Park is an independent charity established in 1990 because there were concerns over the increasing neglect by successive owners. The charity's main objective is to encourage greater use of this inner urban green space as a sanctuary for people and a place of biodiversity. The Friends manage the park under a service-level agreement with the Borough.

The park has been designated a Local Nature Reserve. The cemetery now resembles natural woodland, with many bird and insect species making it their home, although there are still a large amount of gravestones and funerary monuments. There are several trails and walks created by the Friends of Tower Hamlets Cemetery Park.

The Soanes Centre to the west of the park in Mile End is the base of Setpoint London East, an organisation that provides workshops, promoting science and technology, for primary and secondary students. The building is located immediately to the right of the entrance on Southern Grove, opposite the grave of the Soanes family. The centre is also the home of The Friends of Tower Hamlets Cemetery Park.

Those who are buried or have memorials here include: 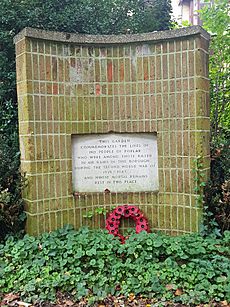 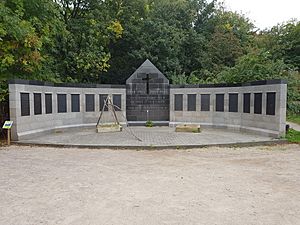 There are 279 Commonwealth service personnel of both World Wars buried here, the names of all being listed on bronze panels on a screen wall memorial in the Mile End section of the park near the entrance on Southern Grove, as are those of four Dutch merchant seamen. Nine British merchant seamen are buried here who were killed when their ship, SS Bennevis, was hit by a high explosive bomb on 7 September 1940, while berthed in the West India Docks, during an air raid in World War II.

All content from Kiddle encyclopedia articles (including the article images and facts) can be freely used under Attribution-ShareAlike license, unless stated otherwise. Cite this article:
Tower Hamlets Cemetery Park Facts for Kids. Kiddle Encyclopedia.