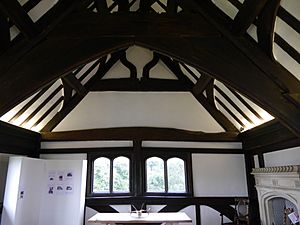 Queen Elizabeth's Hunting Lodge is a Grade II* listed former hunting lodge, now a museum, on the edge of Epping Forest, at 8 Rangers Road, Chingford, London E4, in the London Borough of Waltham Forest, near Greater London's boundary with Essex.

In 1542, Henry VIII commissioned the building, then known as Great Standing, from which to view the deer chase at Chingford; it was completed in 1543. The building was renovated in 1589 for Queen Elizabeth I. The former lodge, now a three-storey building, has been extensively restored and is now a museum, which has been managed by the City of London Corporation since 1960. Admission is free.

There is a smaller hunting lodge, "The Little Standing", about a mile away in Loughton, part of the Warren, the Epping Forest HQ.

All content from Kiddle encyclopedia articles (including the article images and facts) can be freely used under Attribution-ShareAlike license, unless stated otherwise. Cite this article:
Queen Elizabeth's Hunting Lodge Facts for Kids. Kiddle Encyclopedia.