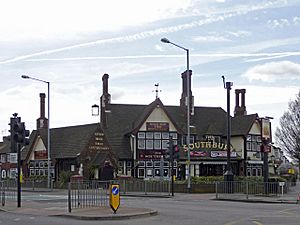 Southbury Road is a road in Enfield, North London, that runs from Enfield Town in the west to Nags Head Road in the east. It is part of the A110 road.

The grade II listed former Ripaults Factory is located in the road.

Southbury Road football stadium once stood in the road and was the home of Enfield FC from 1936 until it was sold in 1999 for housing and retail development. The failure of the club to relocate to Enfield led to the formation of Enfield Town in 2001.

All content from Kiddle encyclopedia articles (including the article images and facts) can be freely used under Attribution-ShareAlike license, unless stated otherwise. Cite this article:
Southbury Road Facts for Kids. Kiddle Encyclopedia.