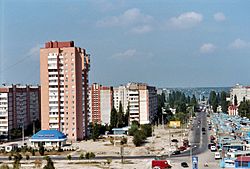 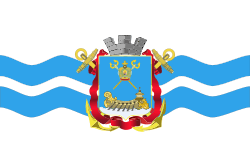 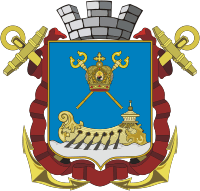 Mykolaiv (Ukrainian: Миколаїв, also referred to as or Mykolayiv, Nikolaev, or Nikolayev; Polish: Mikołajów) is a major city in southern Ukraine.

It is the administrative center of the Mykolaiv Oblast (province), as well as of both the Mykolaivsky and Zhovtnevy raions (districts) within the oblast. However, Mykolaiv is a city of oblast subordinance, thus being subject directly to the oblast authorities rather to the raion administration housed in the city itself.

The town was founded in 1789 by the Russian Governor General of Novorossiya Knyaz Potemkin initially as a shipyard called simply a New Shipyard on the Ingul river. Knyaz Potemkin signed an order to construct a shipyard on August 27, 1789, which is considered to be a city birth date. The shipyard was to serve for the repair of the Russian Navy ships in the Russo-Turkish war. Later Potemkin ordered the shipyard to be named Nikolaev to commemorate the date of fall of Ochakov to the Russian troops under his command on December 6, 1788, close to the day of Saint Nicholas (Nikolay) December 19, in the Russian Orthodox Church. 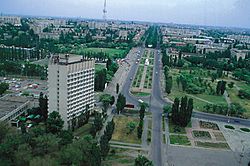 View of the Lenin Prospekt.

The history of the city has always been closely connected to the ship building.

Today Mykolaiv is a major ship building center of Ukraine (as, earlier, of the whole Soviet Union) and an important riverport. The city has 3 major shipyards some of which are capable of building large navy ships. Other important industries are mechanical engineering, power engineering, metallurgy and cosmetics.

All content from Kiddle encyclopedia articles (including the article images and facts) can be freely used under Attribution-ShareAlike license, unless stated otherwise. Cite this article:
Mykolaiv Facts for Kids. Kiddle Encyclopedia.