Waipahu is a former sugarcane plantation town and now census-designated place (CDP) located in the ʻEwa District on the island of Oʻahu in the City & County of Honolulu, Hawaiʻi, United States. As of the 2010 Census, the CDP population was 38,216. The U.S. postal code for Waipahu is 96797.

Waipahu is the name of an artesian spring. In Hawaiian, Waipahu is derived from wai, meaning water, and pahū, meaning "burst or explode"; combined, Waipahu means "water forced up (as out of a spring)". The early Native Hawaiians took pleasure in the cool and clear water gushing from the ground and named this spring Waipahu. Before the Western civilization set foot in Hawaii, the Hawaiians considered Waipahu to be the capital of Oahu. Royalty in the Kingdom of Hawaii would often gather and enjoy the fresh water from the spring Waipahu.

In the early days of the plantation, each worker was assigned a number inscribed on a metal disc about the size of a silver dollar. The numbers 1 through 899 identified Japanese alien; 900 through 1400 were Japanese who were American citizens or Hawaii-born. The 2000 and 2100 series were Portuguese laborers, 2200 Spanish, 2300 Hawaiian, 2400 Puerto Rican, 3000 Chinese or Korean, 4000 and 5000 Filipino aliens, and Filipino Americans. The company imported laborers from many different countries including the Philippines, Japan, China, Portugal, and Norway. Very few laborers working for the Oahu Sugar Co. were Hawaiian. The majority of the company's first laborers were either Japanese or Chinese. Each ethnic group was broken up into different camps. This division was said to have been the result of different cultures and language barriers.

Plantation workers lived by what was called The Plantation System. Field workers received an average monthly salary of $12.50. However, Filipino immigrants were paid less than all of the other laborers because they were the cheapest to import. The Filipinos, on average, made less than $10.00 a month. The Chinese generally were paid the most with a monthly average of $15.00.

In 1932 the Oahu Sugar Co. opened a continuation school, and allowed a half-day off from work once a week for workers to attend. Those who weren't available during the day could also attend evening courses. This was to give them a chance to better their knowledge for a better job.

Oahu Sugar Company shut down plantation operations after the 1995 harvest.

In 1923, the Oahu Sugar Company field also served as the community center which featured band concerts, sporting events, and carnivals. Later, the athletic field was renamed Hans L'Orange Field. Today, the park is primarily used for baseball, and is the home field of Hawaii Pacific University's men's baseball team, the Sea Warriors. It was the home field of the Hawaii Winter Baseball teams the North Shore Honu and West Oahu CaneFires until 2008.

In 1997, the Governor of Hawaii, Benjamin J. Cayetano, proclaimed the months of June 1997 through November 1997 to be Waipahu Centennial Celebration Months. Many activities and events were held to celebrate the Waipahu Centennial.

Waipahu is located along the northern shore of both Middle Loch and West Loch of Pearl Harbor. Both Interstate H-1 and Farrington Highway (Hawaii Route 90) run east–west through the length of Waipahu. The neighboring areas of Waipio, Village Park, Royal Kunia and Waikele use Waipahu as their postal city, and are often considered to be part of Waipahu.

Waikele is located across the H1 freeway north of Waipahu. Waikele consists of newer subdivisions and an upscale outlet shopping center and world-famous golf course. To the west via either roadway can be reached Makakilo and Kapolei, with the Leeward coast beyond. To the east lie Pearl City and the H-2 interchange to Waipiʻo. At the western end of Waipahu is Kunia Road (State Rte. 750) which leads to the Waipahu newer growth areas of Royal Kunia and Village Park north of H-1, and eventually on up across the central plain to Kunia and Schofield Barracks, Wheeler Army Airfield, and Wahiawā. Kunia Road becomes Fort Weaver Road (State Rte. 76) south of Farrington Highway, and goes south through Honouliuli and ʻEwa Villages to ʻEwa Beach.

According to the United States Census Bureau, the CDP has a total area of 2.8 square miles (7.2 km2), all of it land. 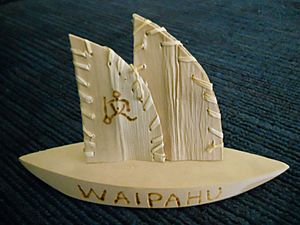 The total number of Civilian Veterans in Waipahu is 2,376, or 9.8 percent of the total population (National average is 12.70%).

At the time of the last survey, 14,458 people in Waipahu had a high school diploma, approximately 68.6% of the population (compared to the national average of 80.40%).

2,349 people in Waipahu also had a bachelor's degree or higher, which equates to approximately 11.1% of the total population (National average was 24.40%).

The Hawaii Plantation Village currently serves as an outdoor museum that showcases the lifestyles and experiences of Hawaii's plantation workers.

The museum opened its doors on September 20, 1992, displaying original structures and replica homes of the multiethnic groups who came to Hawaii between the mid-1800s and the 1940s to work as plantation laborers.

Waipahu Intermediate School and Waipahu High School are in the CDP.

All content from Kiddle encyclopedia articles (including the article images and facts) can be freely used under Attribution-ShareAlike license, unless stated otherwise. Cite this article:
Waipahu, Hawaii Facts for Kids. Kiddle Encyclopedia.