Aulani, a Disney Resort & Spa, is a beachside resort hotel at the Ko Olina Resort in Kapolei, Hawaii on the island of Oahu. Affiliated with the Disney Vacation Club, Aulani was the third Disney "stand-alone" hotel that is located in an area without any adjacent theme park. The others are Disney's Hilton Head Island Resort and Disney's Vero Beach Resort.

The word Aulani in Hawaiian can be loosely translated as "the place that speaks for the great ones" or "with deep messages". When the word is used as a name, it can mean "message from the chief".

The 21 acre Aulani opened to guests on August 29, 2011 with 359 hotel rooms and 460 time-share villas. A November 2018 report stated that at that time, there were 351 rooms (in two 15-story towers), including 16 suites and 481 villas, most being "2-bedroom-equivalent". An October 2018 review specified that there were three restaurants with seating (Makahiki, Ulu Cafe and 'AMA'AMA, ) and some smaller outlets serving snacks such as the Off the Hook poolside lounge. 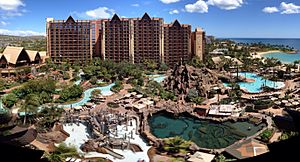 A view from the hotel

Announced in October 2007, Disney unveiled the resort's name in January 2010. The project was estimated to cost $800 million and eventually generate about 1,000 jobs at the resort. The project was managed by Disney Vice-President Djuan Rivers and designed by Joe Rohde of Walt Disney Imagineering.

Timeshare sales were subsequently re-started although an October 2018 review was unable to exactly determine the total number of sales since 2010 due to gaps in published information.

Walt Disney Imagineering collaborated with Wimberly Allison Tong & Goo and Architects Hawaii Ltd. and cultural experts to design and construct what will celebrate the customs and tradition of Hawaii. The company also created an advisory council of Hawaiian elders to ensure great authenticity to Hawaiian culture.

A review in 2018 stated that "the modus operandi at Aulani is 'Big H, Little D', as in: big emphasis on Hawaiian traditions and history, with just a little bit of Disney fairy dust sprinkled over the experience". Other reviews specified the Disney influence as including poolside visits by characters, Mickey-shaped foods, and character breakfasts and dinners. Disney characters that one could meet at the resort in 2018 included Lilo, Stitch, Nani, David, Moana, Donald Duck, Pluto, Mickey and Minnie Mouse.

When staff are hired, Hawaiian language skills are preferred for all jobs as part of the resort's plan to expose guest to the language of the land.

In July 2019, Forbes magazine review emphasized the company's extensive use of Hawaiian culture, including art and architecture and the program that exposes youngsters to the "culture, art and music of Hawaii through interactive play". The reviewer made this comment:

"There is both a dramatic and sublime sense of place here, as everything—from architecture to art, activities to aliments—at Aulani connects to a deeper meaning and embraces the people, places, past and present, art, music, dance and foods of Hawaii ... Aulani is not a theme park; it is a ... hideaway with just enough Disney-orchestrated animation and activity to add rhythm and variety to your vacation days.

All content from Kiddle encyclopedia articles (including the article images and facts) can be freely used under Attribution-ShareAlike license, unless stated otherwise. Cite this article:
Aulani Facts for Kids. Kiddle Encyclopedia.