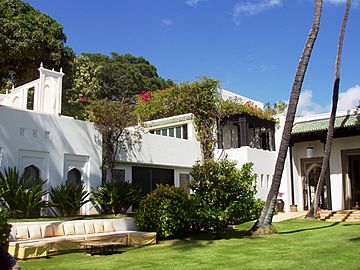 The Shangri La Museum of Islamic Art, Culture & Design is housed in the former home of Doris Duke near Diamond Head just outside Honolulu, Hawaii. It is now owned and operated as a public museum of the arts and cultures of the Islamic world by the Doris Duke Foundation for Islamic Art (DDFIA). Guided tours depart from the Honolulu Museum of Art, which operates the tours in co-operation with DDFIA.

Construction of Shangri La took place from 1936 to 1938, after Doris Duke's 1935 honeymoon which took her through the Islamic world. For nearly 60 years, Duke commissioned and collected artworks for the space, eventually forming a collection of over 4,000 objects. The structure was designed by Marion Sims Wyeth. An artistic reflection of the construction of Shangri La can be found in Kiana Davenport's novel Song of the Exile.

The building was opened to the public as a museum, the Shangri La Museum for Islamic Art, Design & Culture, in 2002. 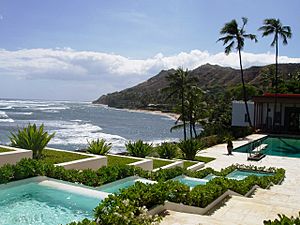 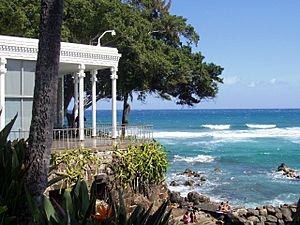 The Shangri La Museum for Islamic Art, Design & Culture displays a wide-ranging collection of art, furnishings, and built-in architectural elements from Iran, Morocco, Turkey, Spain, Syria, Egypt, and India - among others. Gilt and painted ceilings from Morocco, vivid ceramics from Iran (including the only complete lusterware Ilkhanid mihrab in North America), painted wooden interiors from Syria, pierced metalwork and vibrant textiles from Spain to India (including a magnificent pair of shaped carpets, made for the Mughal emperor) are among the many highlights. Its multiple buildings on the campus also include The Playhouse (a reduced-scale version of the 17th century Chehel Sotoun in Esfahan, Iran, now used for public programs and artist residencies).

The outdoor landscaping has a number of gardens, including a formal Mughal garden inspired by the Shalimar Gardens, as well as terraced water features, a Hawaiian fishpond, tropical gardens and a waterfall, and fabulous vistas of the Pacific Ocean.

Tours of Shangri La originate at the Honolulu Museum of Art, and tickets must be reserved well in advance. Individual access to the museum is not granted.

Tours last about two and a-half hours, with one and a-half hours onsite at Shangri La. Tours feature the public rooms of the museum, and portions of the grounds: including the Entry Courtyard with Bahia Shehab's My People mural, the Mughal Garden, the covered lānai overlooking the Pacific Ocean, and views of the Playhouse/pool/water cascades.

The Shangri La Museum of Islamic Art, Culture & Design has a rich calendar of public programs throughout the year, including educational activities, lectures, and performances by the artists in residence, including musicians (such as Alsarah and the Nubatones), dancers (such as Amirah Sackett), comedians (Tanzila 'Taz' Ahmed and Zahra Noorkbakhsh of Good Muslim Bad Muslim), and intellectuals (such as Dr. Lonnie Bunch).

The Shangri La Museum of Islamic Art, Culture & Design is situated on a 4.9-acre (20,000 m2) oceanfront lot in the exclusive Black Point residential neighborhood near Diamond Head, Hawaii. All tours to Shangri La begin and end at the Honolulu Museum of Art, which occupies 3.2 acres (13,000 m2) near downtown Honolulu.

As the museum operates under the terms of a conditional use permit from the City and County of Honolulu, visitor access is restricted. Visitors are not permitted to drive or park on-site at Shangri La or in the surrounding residential neighborhood.

All content from Kiddle encyclopedia articles (including the article images and facts) can be freely used under Attribution-ShareAlike license, unless stated otherwise. Cite this article:
Shangri La (Doris Duke) Facts for Kids. Kiddle Encyclopedia.