Tripler Army Medical Center (TAMC) is a major United States Department of Defense medical facility administered by the United States Army in the state of Hawaii. It is the tertiary care hospital in the Pacific Rim, serving local active and retired military personnel along with residents of nine U.S. jurisdictions and forces deployed in more than 40 other countries in the region. Located on the slopes of Moanalua Ridge overlooking the Honolulu neighborhoods of Moanalua and Salt Lake, Tripler Army Medical Center's massive coral pink structure can be seen from any point in the Honolulu District. It also serves as headquarters of the Regional Health Command - Pacific. 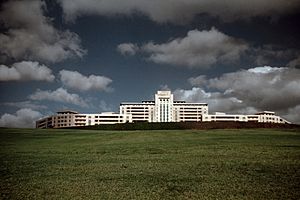 The main hospital facility is within the Honolulu census-designated place.

Tripler Hospital was established in 1907, housed in several wooden structures within Fort Shafter on the island of Oʻahu. In 1920 it was named after a legendary American Civil War medic, Brigadier General Charles Stuart Tripler (1806-1866), who made significant contributions to the development of military medicine.

Tripler Army Medical Center was commissioned by Lt. General Robert C. Richardson Jr., who was Military Governor of the Territory of Hawaiʻi during World War II. General Richardson hired the New York City based architectural firm of York & Sawyer to design the Modernist medical complex. The noted local landscape architect Robert O. Thompson designed the landscape to work in concert with the Modernist architecture to create a "place of solace" for US military soldiers to recuperate both emotionally and physically. At the outbreak of World War II, Tripler Army Medical Center had a 450-bed capacity which then expanded to 1,000 beds through the addition of barracks-type buildings. Plans for the new Tripler Army Medical Center on Moanalua Ridge were drawn in 1942 and construction was completed in 1948. It was officially dedicated on September 10, 1948.

According to the contract documents from 1944, the signature coral pink color of Tripler Army Medical Center was a personal choice of General Richardson, who borrowed the color and many other design elements of the complex from the Royal Hawaiian Hotel in Waikīkī. The Royal Hawaiian was one of the primary recreational sites for US military personnel during World War II and was also a design of the landscape architect, Robert O. Thompson.

According to Tripler spokeswoman Margaret Tippy, an alternate reason for the pink paint job was supplied by retired Col. Robert B. "Woody" Wood, who was the Army Corps of Engineers area engineer when Tripler was built, and Sophie Frandsen, who had been the secretary to the chief architect of Tripler.

The architect came into Wood's office one day and said it was time to select the color for the hospital. Wood said he looked out his window at the red dirt on the then-undeveloped Moanalua Ridge and said, "You've got to get it as close to that color as you can because that's the color it will be when you're through."

All content from Kiddle encyclopedia articles (including the article images and facts) can be freely used under Attribution-ShareAlike license, unless stated otherwise. Cite this article:
Tripler Army Medical Center Facts for Kids. Kiddle Encyclopedia.