Fort Shafter, in Honolulu CDP, City and County of Honolulu, Hawai‘i, is the headquarters of the United States Army Pacific, which commands most Army forces in the Asia-Pacific region with the exception of Korea. Geographically, Fort Shafter extends up the interfluve (ridgeline) between Kalihi and Moanalua valleys, as well as onto the coastal plain (as Shafter Flats) at Māpunapuna. A portion of the area is also known as the Palm Circle Historic District; it is listed on the National Register of Historic Places and has been further designated as a U.S. National Historic Landmark. It is also known as Palm Circle or 100 Area.

Fort Shafter is the oldest military base on Oahu and celebrated its 100th birthday on June 22, 2007.

Fort Shafter has been home to the senior Army headquarters in Hawaii for a century. Construction began in 1905 on the ahupua'a of Kahauiki, former Hawaiian crown lands that were ceded to the United States government after annexation. When the post opened in 1907, it was named for Major General William Rufus Shafter (1835–1906), who led the United States expedition to Cuba in 1898.

Palm Circle (which is a National Historic Landmark) was laid out as a cantonment for an infantry battalion. The barracks and officers' quarters were arranged around a parade field ringed by Royal Palms. The 2d Battalion, 20th Infantry Regiment was the first unit stationed at the new post.

Fort Shafter gradually spread out from Palm Circle. Tripler General Hospital once stood where the highway intersection is today (the hospital moved to its present location in 1948). In 1914, a regimental-sized cantonment area was constructed (near Richardson Theater). The Hawaiian Ordnance Depot was built in 1917 as a separate post (near today's post exchange). In 1921, the Hawaiian Department moved to Fort Shafter from downtown Honolulu. Finally, a new area was constructed in 1940 for Signal Corps elements. 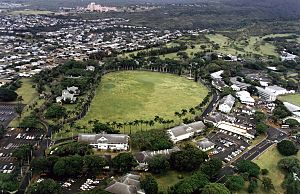 For most of the next half century, Fort Shafter has remained the senior Army headquarters for the Asia-Pacific region. In 1947, the headquarters was renamed U.S. Army, Pacific. The post continued to adapt to meet the Army's evolving requirements. In the early 1960s the new Moanalua Freeway split the post in two. In 1974, when the headquarters was eliminated, Fort Shafter became home to U.S. Army Support Command, Hawaii, and the U.S. Army Corps of Engineers, Pacific Ocean Division (relocated from Fort Armstrong, (Hawaii)). In 1979, the Army established U.S. Army Western Command, which was renamed U.S. Army, Pacific in 1990. In 1983, the Army conveyed to the State of Hawaii 750 acres (3.0 km2) of undeveloped land on the northern end of post. Today Fort Shafter remains the focal point for command, control, and support of Army forces in the Asia-Pacific region.

All content from Kiddle encyclopedia articles (including the article images and facts) can be freely used under Attribution-ShareAlike license, unless stated otherwise. Cite this article:
Fort Shafter Facts for Kids. Kiddle Encyclopedia.