Kalihi is a neighborhood of Honolulu on the island of Oʻahu in Hawaiʻi, United States. Split by the Likelike Highway (Route 63), it is flanked by downtown Honolulu to the east and Mapunapuna, Moanalua and Salt Lake to the west.

Kalihi is the name of the ahupuaʻa (ancient land division) between Kahauiki and Kapālama in the Kona (now Honolulu) district of O'ahu. The ahupua'a consists of Kalihi Uka, Kalihi Waena and Kalihi Kai. Historically, Kalihi Kai was the site of the former Leprosy Receiving Station, where those suspected of leprosy were examined prior to treatment or being sent to Kalaupapa on the island of Molokaʻi. Kalihi was also known for its fishponds, ʻĀpili, Pahouiki, Pahounui, ʻAuiki, and Ananoho, near the present Sand Island Access Road (Route 64) all of which have since been filled in. The harbormaster of Kamehameha I, Captain Alexander Adams, maintained a residence near the ʻĀpili pond. The name comes from ka lihi which means "the edge" in the Hawaiian language, and was used for districts on other islands as well. Located at 21°20′10″N 157°52′35″W﻿ / ﻿21.33611°N 157.87639°W﻿ / 21.33611; -157.87639﻿ (Kalihi), It was thought to be named by Prince Lot (the future King Kamehameha V in 1856.

A community of Kalihi

The lower valley has been a residential area for a considerable time and is home to numerous tracts of older houses. It becomes commercial and maritime close to the water.

Kalihi is famous for Pele's family such as her sister, mother, and the wife of Wakea. In this region of Honolulu, they had many adventures: one that she saved Wakea (her husband) "who was being taken away for sacrifice, by embracing him." 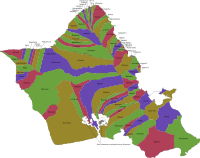 Historically, Kalihi is an ahupuaʻa, or area of land ruled by chief or king and managed by the members of the ʻaliʻi

All content from Kiddle encyclopedia articles (including the article images and facts) can be freely used under Attribution-ShareAlike license, unless stated otherwise. Cite this article:
Kalihi Facts for Kids. Kiddle Encyclopedia.