Moanalua is a valley, a stream, an ahupuaʻa, and a residential neighborhood in Honolulu, Hawaiʻi. The valley extends inland from behind Āliapaʻakai crater (Salt Lake) to the crest of the Koʻolau Range.

Neighboring areas include Māpunapuna and Salt Lake on the south, Fort Shafter on the east, and Red Hill and Hālawa Valley on the west.

Samuel Mills Damon inherited the ahupuaʻa (uplands-to-sea tract) of Moanalua in 1884 from Ke Aliʻi, Bernice Pauahi Bishop, whose husband Charles Reed Bishop was a business partner of Damon. Before her, since the lands were won in battle by Kamehameha I they passed from a number of figures, then to Prince Lot Kapuāiwa (who became King Kamehameha V), and then to Princess Ruth Keʻelikōlani after Kamehameha V's passing.

Damon later became one of the first trustees of the Kamehameha Schools established by the Bishops. The Damon estate sold much of Moanalua to commercial and residential developers in 1956. Moanalua Elementary School was established in the area in 1884. 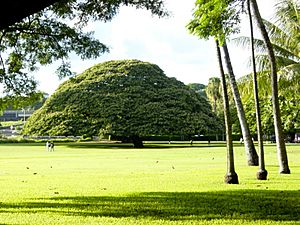 One of many trees at Moanalua Gardens

Moanalua Gardens are inland from the Interstate H-201 which is known as the Moanalua Freeway, off Exit 3. One of its monkey pod trees is seen on Hitachi's Japanese TV commercials, and is occasionally referred to as Hitachi no ki (ja:日立の樹code: ja is deprecated , "Hitachi tree") in Japan.

The gardens were a gift to the public from Damon and maintained by a trust since his death in 1924. It was one of Hawaiʻi's earliest public parks although has remained privately owned.

All content from Kiddle encyclopedia articles (including the article images and facts) can be freely used under Attribution-ShareAlike license, unless stated otherwise. Cite this article:
Moanalua Facts for Kids. Kiddle Encyclopedia.