Halawa is a census-designated place (CDP) in the ‘Ewa District of Honolulu County, Hawaii, United States. Halawa Stream branches into two valleys: North and South Halawa; North Halawa is the larger stream and fluvial feature. Their confluence is within the H-3/H-201 highways exchange. Most of Halawa Valley is undeveloped. As of the 2010 Census, the CDP had a population of 14,014.

The entire ahupuaʻa of Halawa is highly sacred to Kanaka Maoli. At the far Makai (ocean) side at Puʻuloa or Pearl Harbor, it is, according to Kanaka Maoli beliefs, the home of the shark goddess Kaʻahupahau, known as the "Queen of Sharks", who protected Oʻahu and strictly enforced kind, fair behavior on the part of both sharks and humans. Until the late 1890s, the home of Kaʻahupahau was famously lined with beds of pearl oysters, however, according to Kanaka Maoli religious experts who follow the goddess, Kaʻahupahau removed all of the oysters (and some say, herself) because the area was being abused by human misdeeds. Today, the water of Pearl Harbor has been highly contaminated by nuclear defueling and other toxic influences, and has thereby been designated as a Superfund site.

The upland, or Mauka, portion of Halawa is sacred to Papahānaumoku, the Kanaka Maoli form of Mother Earth, as it is, according to legend, her birthplace and primary home, as well as one of only two or three known remaining Hale o Papa, womenʻs temples where Papa is worshipped. The valley contains many religious and other cultural sites sacred to Kanaka Maoli. Although many sites were destroyed by the invasion of Kahekili II and especially by the building of the highly controversial H-3 Freeway, many remain and are cared for by Kanaka Maoli Aloha ʻAina practitioners to this day.

In the last two decades, North Halawa has been the site of a very public battle over the religious sites and ecological resources destroyed by H-3, which is the most expensive freeway per mile in human history. At least two species were driven to probable extinction (none have been sighted since construction began), many more are declining rapidly, the main aquifer of the area was badly damaged, and religious sites were seriously impacted. Although the freeway was opened in 1997, many are still fighting for mitigation of these impacts, and some are asking for the freewayʻs closure. In 1993, thirteen cultural practitioners were arrested while conducting a ceremony to pray for the healing of the valley. Their lele (religious altar) was destroyed, and the caretakers of the area were barred from entrance to the sites. Today, some of these caretakers, many of them kupuna (elders), have returned to care for the sites, although they now do so through a layer of soot and with the roar of the freeway as a constant sonic backdrop. Many kanaka maoli do not use the freeway because of these impacts, and because of the lasting belief that the road is haunted—an often-attributed explanation for the high accident rate on the freeway (more generally believed to be caused by the high speeds often used by the motorists who traverse it).

There is evidence in the documentary record that upper Halawa was highly significant to Kanaka Maoli. Most of the evidence may be, however, be in the oral record. The Hale O Papa and luakini are mentioned in the massive collection of Bishop Museum reports that took many years to finally be released. However, there was no archaeological evidence that these structures existed by the time of highway construction. The area has been greatly impacted by sugarcane plantations, homesteading, and light industrial use. The site of Waipao Heiau, for example, is currently occupied by a food distribution warehouse.

The Papa temples were associated with the great Ku temples (luakini), which demanded human sacrifice and were usually in areas of greater population and state sponsorship. Without a luakini, there would be no Hale o Papa, according to Samuel Kamakau (see Bishop Museum, H-3 project reports).

Historically, Halawa was an ahupuaʻa, or area of land ruled by chief or king and managed by the members of the ʻaliʻi.

"Neighborhoods" of Halawa are very disjointed, in part because of the significant highway exchanges (see below) that now occupy nearly all of the lower end of Halawa Valley between Red Hill and Aloha Stadium. Much of the remainder of the valley along both sides of Interstate H-3 is developed into commercial and light industrial properties. On the east side of H-3 are found the State Animal Quarantine Station and the Halawa High and Medium Security Facility (main O‘ahu prison).

Where the valley widens out closer to Pearl Harbor occur residential neighborhoods: Foster Village adjacent to Āliamanu; and the stadium area between Aloha Stadium and Makalapa. The interfluve (uplands between valleys) on the west comprises Halawa Heights, extending up to Camp H. M. Smith. Along the lower, western edge, Halawa Heights merges with the neighborhoods of ‘Aiea.

The U.S. Postal Code for Halawa Heights is 96701 (the same as for Aiea). The postal code for Foster Village, the stadium area, and Makalapa is 96818 (the same as Āliamanu). 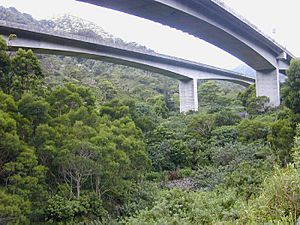 According to the United States Census Bureau, the CDP has a total area of 2.3 square miles (6.0 km2), all land.

The route of H-3 extends from its western terminus with east-west Moanalua Freeway (H-201; connecting eastward to Honolulu or westward to H-1 and Aiea) to the 1100-foot (335-m) elevation entrance into the Tetsuo Harano Tunnels, penetrating the Ko‘olau crest. The freeway continues beyond to Kaneohe on windward Oahu.

A significant proportion of H-3 within the valley is carried on a viaduct; although very expensive to construct, the viaduct is the only way to construct a freeway of this magnitude through such a narrow valley without flooding and destabilization concerns; it is also believed to offer some returns in terms of preservation of both archeological sites and stream ecology.

All content from Kiddle encyclopedia articles (including the article images and facts) can be freely used under Attribution-ShareAlike license, unless stated otherwise. Cite this article:
Halawa, Hawaii Facts for Kids. Kiddle Encyclopedia.