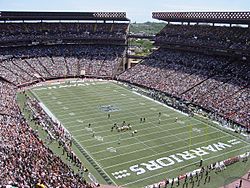 Aloha Stadium is a stadium in Honolulu, Hawaii, United States. It is the largest stadium in the state of Hawaii. It is located in the western Honolulu suburb of Halawa. The stadium is home to the University of Hawaiʻi Rainbow Warriors football team (Mountain West Conference, NCAA Division I FBS).

All content from Kiddle encyclopedia articles (including the article images and facts) can be freely used under Attribution-ShareAlike license, unless stated otherwise. Cite this article:
Aloha Stadium Facts for Kids. Kiddle Encyclopedia.