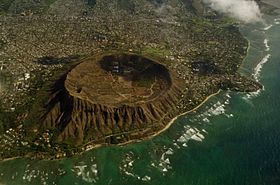 Aerial view of Diamond Head with Kahala to the upper right

Kāhala, is an affluent neighborhood of Honolulu, Hawaii. Kahala is famous as an icon for wealth and the rich. It is famous in Hawai'i for its large concentration of expensive real estate and beachfront properties, which include some of the most expensive in the entire state.

Kahala is also home to the Kahala Hotel & Resort, formerly known as the Kahala Mandarin Oriental, and prior the Kahala Hilton. Also located along the borders are Kahala Mall, and Diamond Head crater.

Residents and owners are a mix of old timers living in older residences (many for more than half a century) and newer arrivals living in large, expensive, mansion-like homes. Many celebrities and business moguls have also bought vacation homes in the area. Kahala is a favored spot for investors to buy and fix old homes and sell for record-breaking prices. In 2006, typical prices for a tear-down house in Kahala was $1.4 million to $1.7 million, with beachfront land going for substantially more.

Kahala is one of the few areas of Honolulu to be fairly flat, and yet also be within 5 – 15 minutes' drive of Waikiki or downtown.

The district is also home to several secluded (though publicly accessible) sandy beaches. Unlike the beaches of Waikiki, those in Kahala are rarely crowded.

On 23 August 2014, two snorkelers visiting from Hawaii died while swimming at the beach.

All content from Kiddle encyclopedia articles (including the article images and facts) can be freely used under Attribution-ShareAlike license, unless stated otherwise. Cite this article:
Kāhala, Hawaii Facts for Kids. Kiddle Encyclopedia.