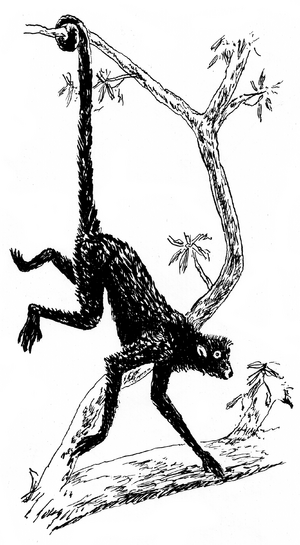 A prehensile tail is the tail of an animal that has adapted to grasp or hold objects. Fully prehensile tails can be used to hold and manipulate objects, and in particular to aid arboreal creatures in finding and eating food in the trees. If the tail cannot be used for this it is considered only partially prehensile - such tails are often used to anchor an animal's body to dangle from a branch, or as an aid for climbing. The term prehensile means "able to grasp" (from the Latin prehendere, to take hold of, to grasp). 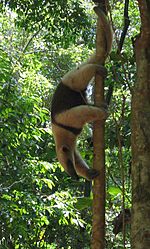 A northern tamandua (Tamandua mexicana) making use of its prehensile tail

All content from Kiddle encyclopedia articles (including the article images and facts) can be freely used under Attribution-ShareAlike license, unless stated otherwise. Cite this article:
Prehensile tail Facts for Kids. Kiddle Encyclopedia.