The southern alligator lizard (Elgaria multicarinata) is a common species of lizard in the family Anguidae. The species is native to the Pacific coast of North America. It ranges from Baja California to the state of Washington and lives in a variety of habitats including grasslands, chaparral, forests, and even urban areas. In dry climates, it is likely to be found in moist areas or near streams. There are five recognized subspecies.

The following five subspecies are recognized as being valid, including the nominotypical subspecies.

The generic name Elgaria is possibly named for an "Elgar" or a pun on "alligator." The specific name multicarinata refers to the keeled scales characteristic of this species. The common name "alligator lizard" is a reference to the fact that the back and belly scales of these lizards are reinforced by bone, as they are in alligators.

The southern alligator lizard measures from 3 to 7 in (8 to 18 cm) in snout-to-vent length (SVL). Including tail, it can reach a foot in length (30 cm). It has a round thick body with small legs and a long somewhat prehensile tail that can be twice as long as the lizard's body. Like many lizards, this species can drop its tail if attacked, possibly giving it a chance to flee. It lives on average 10 to 15 years, and survives well in captivity.

The color of this species is variable, and can be brown, gray, green, or yellowish above, often with red blotches on the middle of the back. Usually there are between 9 and 13 dark crossbands on the back, sides, and tail, with adjacent white spots. These crossbands can be pronounced or covered with reddish or yellowish color.

The scales of E. multicarinata are keeled on the back, sides, and legs. There are 14 rows of scales across the back at the middle of the body. A band of smaller granular scales separates the larger scales on the back and stomach, creating a fold along each side of the animal. These folds allow the body to expand to hold food or eggs.

The southern alligator lizard is native to the Pacific coast of North America, ranging from the state of Washington to Baja California. These lizards can be found across many diverse habitats, including grassland, open forest, chaparral, suburban and urban areas, and even into the desert along the Mojave River. This species is particularly common in foothill oak woodlands, and is often found hiding under rocks, logs, or other surface cover. 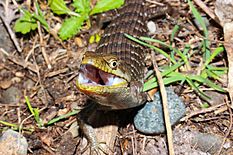 The southern alligator lizard frequently can be found near human habitation, and is often seen foraging in the mornings and evenings. It is often found in or around suburban yards and garages. E. multicarinata is notable for its vicious self-defense, and will bite and defecate if handled.

Mating occurs in spring, typically from April to May, though in warmer regions this species will breed year-round. Eggs are usually laid between May and June and hatch during late summer and early fall. Females lay two clutches of eggs per year, often in decaying wood or plant matter to keep them warm. Females will guard the eggs until they hatch.

All content from Kiddle encyclopedia articles (including the article images and facts) can be freely used under Attribution-ShareAlike license, unless stated otherwise. Cite this article:
Southern alligator lizard Facts for Kids. Kiddle Encyclopedia.